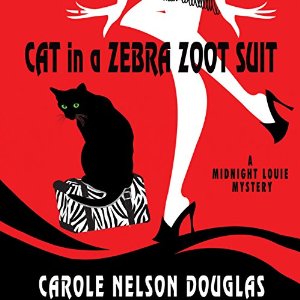 In Cat in a Zebra Zoot suit, the 27th Midnight Louie mystery by New York Times Notable Book of the Year author Carole Nelson Douglas, feline P.I. Midnight Louie channels the jazz and swing-dance age. Petite PR powerhouse and amateur sleuth Temple Barr and her faithful roommate, Midnight Louie, must defend a dear friend from a bizarre murder charge that echoes a long-past atrocity. Meanwhile Temple’s fiancé, Matt Devine, turns detective on a secret mission and her ex, a magician with a counter-terrorist past, tangles with vengeful IRA members and a psycho stalker in Ireland. And just what 60-year-old secret makes a defunct fifties nightclub building in Las Vegas the pit of all evil and greed?

CAT IN A ZEBRA ZOOT SUIT is available from Amazon, Audiobooks and Barnes & Noble.

“Midnight Louie is the funniest, hairiest, hard-boiled P.I. on the planet!”—JANET EVANOVICH

“Just about everything you might want in a mystery: glitzy Las Vegas, real characters, suspense, a tough puzzle, and…on top of it all, a fine sense of humor and some illuminating social commentary.”—The Prime Suspect

“Fans of this series will not be disappointed. There’s plenty of action, and one can see the threads Douglas has so carefully woven throughout the series twenty-six volume run start to begin to be tied up into what one hopes will be a satisfying conclusion.”—5 stars, Night Owl Reviews

She’s a four-time Rita Award finalist and has RT Reviews Magazine lifetime achievement awards in Suspense, Mystery and as a Pioneer of Publishing. Currently, she writes the popular Las Vegas-set series: the first is the Midnight Louie, feline PI, mysteries, partially narrated by a “Sam Spade with hairballs” who’s been compared to Hammer, Hammett, and Nathan Detroit, and the second is the Delilah Street, Paranormal Investigator, noir urban fantasies of werewolf mobsters and Silver Screen zombies in a paranormal Sin City.

Douglas was the first author of a Sherlockian series with a female protagonist, American opera singer-detective Irene Alder, the only woman to outwit Holmes, debuting with the New York Times Notable Book of the Year, Good Night, Mr. Holmes. Adler features in the only books to feature three women tracking Jack the Ripper, Chapel Noir and Castle Rogue, which proposes a totally new suspect for the Ripper.