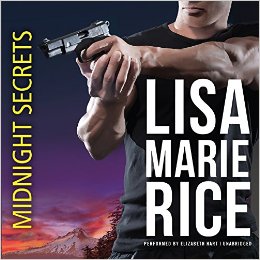 Former Navy SEAL Joe Harris nearly died—twice—on a medevac helo after being blown up by an IED. He’s not moving too great these days, but if there was ever a woman designed to jump-start a man’s hormones, it would be his new neighbor.

Isabel Delvaux came from one of America’s foremost political dynasties, until the greatest terrorist attack since 9/11 killed her entire family. She barely survived the Washington Massacre, only to become prey for rabid reporters. Fleeing to Portland and changing her name was a way out, a way to start over. The only way.

But as they help each other heal—through talk, through touch, through spectacular sex—the past comes back to play. When Isabel’s memory starts to return, and a mysterious stranger sends Joe emails indicating Isabel is in imminent danger, he’ll do anything to help her uncover the truth. Even if that truth is the most terrifying thing of all.

MIDNIGHT SECRETS is available from Amazon and Barnes & Noble.

”Lisa Marie Rice is an ‘autobuy’ author for me. She never disappoints! Her books are comfort reads that I reread time and time again. Hands down she is one of my favorite authors.” –Maya Banks, New York Times bestselling author

”Rice is skilled at bringing the drama and the heat.” –Library Journal, praise for the author