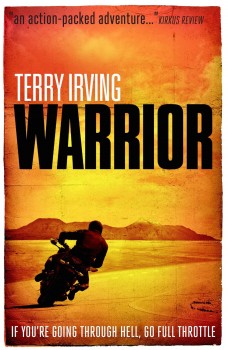 It’s 1973. A machine gun bullet ripping over his head is a sign that motorcycle courier Rick Putnam is heading for trouble again. A winter on the Northern Cheyenne reservation seems to have shaken off any pursuit from last year’s discovery of High Treason in the Oval Office, so it’s time for motorcycle courier Rick and, his girlfriend Eve Buffalo Calf to head back home.

First, a short stop to help out some of his girlfriend’s activist clients–in the small town of Wounded Knee.

A promise made to another Vietnam veteran results in a race through the Black Hills with a secretive cult trying to kill them at every turn. Rick follows the cult back to Washington DC and he, and his computer hacker housemates, take on the cult and the corrupt bureaucrats who support it before it can despoil the sacred lands of the Northern Cheyenne and destroy the childhood of an innocent young girl.

WARRIOR is available from Amazon.

“”Wounded Knee, biker gangs, and religious cults; Terry Irving has captured ’73 at its worst and renegade Rick Putnam at his best.”
–J.M. LeDuc for Suspense Magazine

Born in Bryn Mawr Hospital so as to be near my mother. At least, she told me she was my mother but she was a helpless drunk after my birth and lied to me most of the time so who knows?

Came to Washington after 4 years at the best college in the United States and Immediately took a job riding a motorcycle. And you wonder why I’m still broke at 63…

Returned to television to work the night shift for the morning show and proceeded to experiment with sleep deprivation for the next 18 years until I finally put myself in the mental ward after doing back-to-back 72-hour edit sessions when Nelson Mandela was released. On the bright side, severe depression and sleep deprivation combined to win 4 Emmy Awards and most other awards television people give each other.

Since I’d blown the seals on my mental engine, I left ABC News and had a very good time until the money ran out. Then I became a non-linear video editor (and writer, reporter, graphics artist, and compositor.) Learned the many things I’m really not good at. Edited several programs in Japanese and Spanish. I don’t speak either language.

Ran out of money with a mortgage and a family that enjoyed eating so I joined Fox News for the launch. Ran into Roger Ailes and was fired the day after I pushed them through their first national political conventions–Rog said he would have fired me earlier but “it might have affected my work.”

Ran the ABC National Control room for the second Gulf War and, on the night that Saddam was found in his burrow, left for CNN. Six years later, was fired from CNN by a human Ebola virus named John King for no reason whatsoever.

Wrote my 11th documentary on Jews in the Philippines and two years of show on personal finance and got fired again for writing a script too well.

Finally, forced to write novels, found an agent and a publisher and the future was bright. Now that both agent and publisher are long gone, am struggling to survive but haven’t published erotica (yet.)