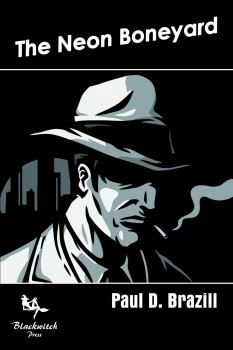 In the neon-soaked, blood-spattered hell-hole they call The City, Roman Dalton struggles to fight the forces of darkness, even when he becomes a creature of the night. Werewolves, vampires, zombies: they’re all just amateurs when it come to the real menace who haunts the streets. Let Brazill take you on a grim dark journey to hell and back. Bring lots of whisky: it’s a rough ride.’

THE NEON BONEYARD is available from Amazon.

Paul D. Brazill is the author of Guns Of Brixton, Cold London Blues, A Case Of Noir and Kill Me Quick! He was born in England and lives in Poland. He is an International Thriller Writers Inc. member whose writing has been translated into Italian, German and Slovene. He has had writing published in various magazines and anthologies, including The Mammoth Books of Best British Crime. He has edited a few anthologies, including the best-selling True Brit Grit – with Luca Veste.