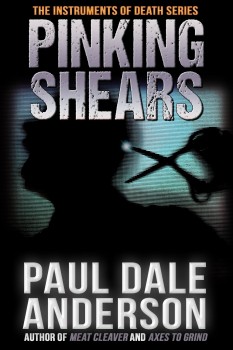 Pinking Shears is the novel everyone has been waiting to read. Not only does Pinking Shears link Paul Dale Anderson’s classic Claw Hammer with the more recent Pickaxe, it introduces readers to rookie detectives Troy Nolan, Bill Bowers, Rich Pearson, and Betty Brooks. Homicide Lieutenant Carl Erickson and Deputy Coroner Dr. Marsha Wade are working the case in this exciting addition to the Instruments of Death series of police procedurals. Brooks goes undercover as a streetwalking prostitute to find a vicious serial killer, Nolan looks for a missing boy, and Carl becomes jealous when a handsome new doctor dates Marsha. Can a cop do his duty and have a personal life, too? How important is family and what constitutes a normal family in this day and age of shifting gender roles, rampant divorce rates, and neglected children?

PINKING SHEARS is available from Amazon and Barnes & Noble.

Paul Dale Anderson is the author of Abandoned (Eldritch Press), Winds, Darkness, Light (2AM Publications), and the Instruments of Death series of digital crime-suspense novels from Crossroad Press. His short stories have appeared in The Horror Show, Deathrealm, Dark Regions, The Arkham Sampler, Weirdbook, The Horror Zine, Pulp Adventures, and major anthologies.