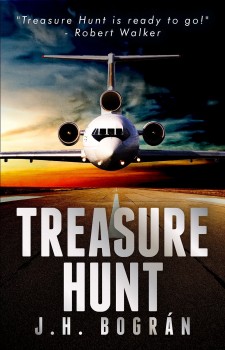 The Hunt is on!

When The Falcon — a master thief and man of unquestionable honor despite his profession — gets a cryptic message from Bill Porter, a prisoner who’s finishing a twenty-year sentence, he’s intrigued.

Twenty years ago, Bill hijacked a plane carrying a fortune in gold, money and jewels. Before he was caught, he stashed his ill-gotten goods where no one would ever find them.

Now, after spending twenty years in prison, Bill is ready to get out and start a new life. But the F.B.I. is watching him and Bill knows, the minute he tries to retrieve his hidden treasure, they’ll grab him, send him back to jail and confiscate the goods.

The Falcon agrees to retrieve the money and deliver it to Bill’s daughter, Jamie, for a cut.

But, after The Falcon rescues Jamie from lowlife crooks, he acquires a willing and equal partner in his daring deeds. A partner who can match his passions with her own.

TREASURE HUNT is available from Amazon.

Treasure Hunt is one of the fastest-paced thrillers this reviewer can remember reading. It is a literal page-turner, an unstoppable plot that speeds the reader through like riding a freight train.
–Annie Haws, Wild Child Publishing

Treasure Hunt is an intriguing novel. Bogran’s is one step ahead of his reader. He also provides interesting insight of architecture and the life of a fictional thief. Even Borgan’s stock characters are carefully selected and thought out. At first the reader ponders what is the significance of the characters detailed lives and purpose.
–The Celebrity Café

J. H. Bográn, born and raised in Honduras, is the son of a journalist. He ironically prefers to write fiction rather than fact.

José’s genre of choice is thrillers, but he likes to throw in a twist of romance into the mix.

His debut novel TREASURE HUNT, which The Celebrity Café hails as an intriguing novel that provides interesting insight of architecture and the life of a fictional thief, has also been selected as the Top Ten in Preditors & Editor’s Reader Poll.

FIREFALL, his second novel, was released in 2013 by Rebel ePublishers. Coffee Time Romance calls it “a taut, compelling mystery with a complex, well-drawn main character.”

His other works include novels in both English and Spanish, short stories, contributor to The Big Thrill magazine, screenwriter for Honduras domestic television and movie reviewer for La Prensa.

He’s a member of The Crime Writers Association, the Short Fiction Writers Guild, and the International Thriller Writers where he also serves as the Thriller Roundtable Coordinator.