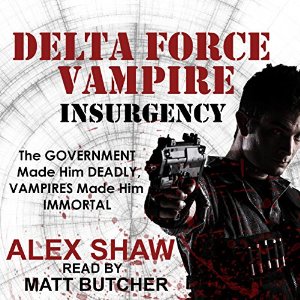 The government made him deadly; vampires made him immortal…. A new hero and a new genre from Kindle best-selling author Alex Shaw.

Brad Black, call sign “Peter Pan”, is a member of America’s elite Delta Force unit. Tasked to recon a tunnel network in use by the Taliban, it is just another day in the sandpit for the delta boys until something attacks them in the darkness. Presumed killed in action, Black is abducted by a shadowy figure before being forced to cross the inhospitable Afghan wilderness in order to be reunited with what is left of his team.

Meanwhile a general from Russian Military Intelligence (GRU) arrives at Firebase Python with news of a Cold War weapons experiment so shocking its existence has, until now, remained secret. Horrific secrets buried in the Afghan mountains for a quarter of a century are about to be unleashed.

Alex Shaw spent the second half of the 1990s in Kyiv, Ukraine, teaching and running his own business consultancy before being head-hunted for a division of Siemens. The next few years saw him doing business for the company across the former USSR, the Middle East, and Africa. He is a member of the International Thriller Writers organisation, the Crime Writers Association and the author of the Aidan Snow SAS thrillers.Alex, his wife and their two sons divide their time between homes in Kyiv, Ukraine and Worthing, England. Alex can be contacted via his website www.alexshaw.com or you can follow him on twitter: @alexshawhetman