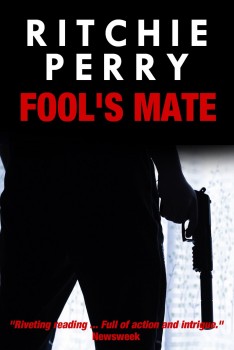 SR(2) operative Philis has been assigned to escort a nubile Ugandan across France and into England.When he meets Kuldip he quickly discovers there is far more to the job than his boss, Pawson, has led him to believe. She was formerly the favourite mistress of Idi Amin, the deposed Ugandan dictator, and various factions are determined to use deadly force to stop her reaching her destination. The mad chase begins on the Riviera, moves to the desolate plateau of the Causses region and comes to an explosive end in a nearly abandoned fishing village on the coast.

“The narrative is swift, taut and salted by Ritchie’s almost savage wit, a stand-out here as in all of his novels.” Publishers Weekly

“The Philis novels are well-written, provocative, and amusing……Philis is all of us – and our understanding of that creates much of the pleasure we get from reading about him.” Pelican

FOOL’S MATE is available from Amazon and Amazon UK.

“Perry packs every page with action and the wise-cracking Philis is tough enough to handle it.” Booklist
Philis’s “adventures trying to spirit Idi Amin’s No. 1 Ugandan mistress from the European continent into England while assorted villains give chase keep our attention throughout.” LA Herald-Examiner

“Perry’s Philis, the undaunted, is as active as ever during the chase for rubies and vengeance……Speedy and enjoyable.” Bookworld

Born and bred in Norfolk, England I have had about 40 books published. 18 of these are thrillers which have been translated into French, German and Italian.