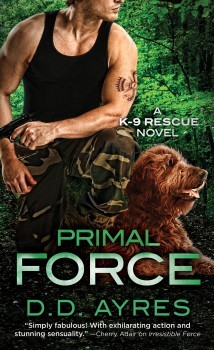 Passion and suspense are front and center in D.D. Ayres’ fourth installment of the K-9 Rescue Series, PRIMAL FORCE.

Dog trainer Jori Garrison has little interest in romance and spends all of her time training her Warrior Wolf Pack, special dogs taught to work with disabled veterans. Wounded veteran Lauray Batisse is resistant to a new service dog, having lost his beloved K-9 in Afghanistan. But sparks fly when Jori and Lauray cross paths, pushing these two together on an adventure that heats up when enemies start hunting them down.

Extraordinary canines, fierce attraction, and danger are the elements at play in PRIMAL FORCE, and Ayers was kind enough to take a break from the action to answer a few questions for The Big Thrill about her newest release.

Of particular importance in PRIMAL FORCE, and all of Ayres’ K-9 books, is the special relationship between the dogs and their Handlers.

“Lauray was military K-9 police, who lost his K-9 and his leg in the same horrific explosion in Afghanistan,” Ayres says.

Tormented by injuries, PTSD kicks in as Batisse’s physical rehabilitation is completed. Forced to get a PTSD service dog, he is reluctant to accept Samantha, the Golden Doodle he’s assigned.

“She’s the antithesis of the high-energy, hard-charging K-9s he’s accustomed to,” Ayers says. “He thinks she’s a waste of dog fur and dismisses her as a ‘Cheese Doodle’ because of her reddish coloring and big poufy tail. How he comes to appreciate Sam’s unique abilities, which are central to the suspense plot, made it a special story for me to write.”

Each book in the K-9 Rescue Series features a different K-9 team, and Ayres highlights the unique challenges she faces making a dog a crucial part of the suspense. “Just like the humans, the dogs all have different personalities. They are different breeds with different skill sets. I try to depict them as real animals, not as people in dog suits. Thinking like a dog is not as easy as it sounds. For instance, do I use a dog’s point of view? I wrote a novella and the first two novels without it. In PRIMAL FORCE it became absolutely necessary.”

Intensive research is also required to write books featuring a group of dogs she refers to as the “Olympians/SWAT/Mensa members of the canine world.” Great contacts, like Brad Thompson, a Fort Worth, Texas Police Officer with twenty-two years experience in the Special Operations/K-9 Unit, have helped to educate Ayres. She frequently sends Thompson scenes to check for accuracy and the realism of the dog / human relationship. “I may not get it all right, but I try.”

For PRIMAL FORCE, Ayres called upon the unique experience of Patriot Paws in Rockwall, Texas, a group who train service dogs for injured veterans, as well as those that specialize in PTSD. “Service dogs have totally different personalities from high-energy law enforcement or military dogs. They are people-oriented, patient, calm, very smart,” she says. “These dogs are trained in techniques to pull his/her person out of a sudden flashback. They can sense when their person is becoming agitated, or claustrophobic, and have several ways of coping. They remind their person to eat, or take their meds on time.”

There is a special bond between Handlers and their K-9s that Ayres strives to portray in her writing. “They routinely spend more time with their K-9s than with their families,” she says. “They feel a great responsibility for their canine partners.”

Ayres reflects on the level of loyalty between K-9 partners, describing how Brad Thompson’s dog was shot while they were chasing a suspect. Thompson, who had also been hit, refused to go to the hospital until his dog was cared for, taking him to the vet first, where he unfortunately died in Thompson’s arms. Accurately portraying that level of commitment and loyalty is key to the series.

Ayres writing inspiration comes from a host of authors, including, “Mary Stewart and Daphne Du Maurier. They created romantic suspense stories with great mood, and resourceful women in an era 40s-50s when that wasn’t the usual thing.”

Today, Ayres’ reading interests are broad. “I like authentic voices that don’t sound like anyone else. I know it when I start a book and forget I’m a writer looking at story/plot. I’m just along for the ride.”

In talking about her writing process, Ayres describes herself as “a Pantser. I take a premise and then go dry-mouthed to my computer each day to figure out what next. My husband says my writing process is eighty percent of my time writing the first twenty-five percent, and twenty percent of the time writing the rest. I rewrite throughout. When I get to ‘The End’ I’m pretty much done.” Plus, the freedom to do what she loves while staying in her PJs is an added bonus.

Her advice to new authors? “Write! Write daily, or regularly. Write until you finish. Writing isn’t about starting, it’s about finishing. Then write something else. Talent shows through effort,” she says. “And gain an understanding of the business, know how to reach your audience through social media and marketing.”

For those who can’t get enough of the K-9 Rescue Series, Ayres says there will be at least another three books, starting with Rival Forces in May 2016. 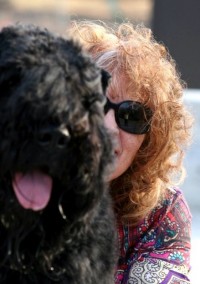 A veteran author of romance and women’s fiction, D.D. Ayres is new to Romantic Suspense. She believes the lure of romance is always the human connection. Put that connection in physical jeopardy, and and we learn a bit moreabout who we really are.

With her K-9 Rescue series, D.D. hopes you will enjoy her sexy, suspenseful portrayals of K-9 teams at their best.

D.D. lives in Texas with her husband and a soft-coated Wheaten terrier named Zoe.

To learn more about D. D., please visit her website.