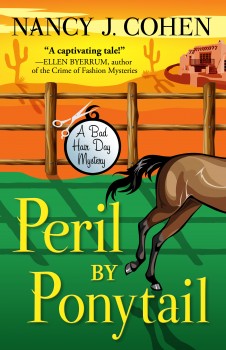 Marla Vail is a hairdresser living in South Florida who gets involved in sleuthing and finding murderers. In PERIL BY PONYTAIL, the twelfth in the Bad Hair Day series of cozy mysteries by Nancy J. Cohen, Marla is on a belated honeymoon with her homicide detective husband Dalton to a large dude ranch in Arizona run by his cousins to help find who is causing malicious mischief there. And then the murders start….

Tell us about the Bad Hair Day series and PERIL BY PONYTAIL, out this month.

The mysteries feature hairstylist Marla Vail née Shore, who first meets Detective Dalton Vail in Permed to Death. Ten books later, they get married in Shear Murder. But there’s no rest for our sleuths. They move into a new home in Hanging by a Hair, where they discover a dead body next door. Finally, Marla and Dalton go on a honeymoon in PERIL BY PONYTAIL

Marla isn’t thrilled about a honeymoon in the desert. She’s dreamed about lying on a lounge chair at a tropical beach with palm fronds swaying overhead. But Dalton has accepted an invitation to stay at his cousin’s ranch where trouble is brewing. The cousin hopes that Dalton, a homicide detective, can help determine the source of sabotage at the dude ranch and at a ghost town Dalton’s uncle is renovating. Things go downhill fast from the moment the newlyweds arrive when a local forest ranger is found dead.

Why did you choose South Florida as your setting? Why Arizona?

I live in South Florida, so it’s easy to do research in my own backyard. Plus Florida has so much diversity in terms of ecology, demographics, history, quaint towns, and more that a wealth of material exists for a mystery series. All I need to do is read the newspaper for ideas.

Like many Floridians, Marla is a transplant from up north. She’s concerned about Florida issues such as child drowning prevention, which is a real hazard here where most folks have backyard pools. Other Florida issues work their way into my stories that have a humorous slant. I’d rather people smile when they read my books. If you want serious crimes, watch the daily news on TV. My aim is to entertain, and I hope Marla’s exploits fulfill that goal.

As for Arizona, like Dalton I have a cousin who lives there. And I’ve always wanted to see what goes on at a dude ranch. So with my cousin as tour guide, I explored Arizona in a memorable trip that led me to adventures such as touring an underground copper mine, hunting ghosts at a haunted hotel, exploring a cavern, visiting ghost towns, and hiking trails at a dude ranch. The scenery surprised me. I’d expected dry sand and not much else, but the Sonoran Desert in Arizona has lots of vegetation and some beautiful trees and tall cacti. A historical element gives an added dimension to PERIL BY PONYTAIL

There are suggestions that Marla has some psychic ability, and your first books were futuristic romances. Do you have some particular interest in writing paranormal elements?

I like to give women special powers. Marla has a talent as a conversationalist, which is important for a hairdresser who works with clients all day. Thus she’s able to get people to talk, which is helpful in solving murder mysteries. She is sensitive to ghosts and may be aware of their presence at times, but she doesn’t talk to them or anything. As for my “futuristics,” all the women have some sort of special power. My heroines are strong, capable, and committed to learning the truth.

This goes as well for my Drift Lords series with Wild Rose Press. The heroes might be hunky space warriors, but the Earth women with whom they team up have powers derived from the ancient Norse gods. Together they fight evil to save the world. It’s fun to write these romantic adventures. Marla is more grounded, and although she might sense an entity is nearby, she doesn’t have any extrasensory perception otherwise.

Why did you decide to switch from science fiction romances to cozy mysteries? Have you noticed any differences in the romance, science fiction, and mystery fans and communities?

I learned how to plot a murder mystery when I began putting mysteries into my romances. I decided I liked plotting the straight mystery and that turned me on to doing the Bad Hair Day series. Creating a hairstylist sleuth was fun. The beauty salon is the perfect backdrop, with clients coming and going all day and gossiping.

Yes, there’s a distinct difference in the fan base between the genres. When I promote my two series, I am aiming at different audiences. There’s even a distinction between science fiction romance and paranormal romance fans. So I have to build my mailing lists for each genre separately, although I do cross-promote as much as possible.

Cozy mysteries don’t seem to get a lot of critical respect, but you must be pleased by the enjoyment that readers express with your books in Amazon customer reviews.

I love reader feedback! This is the main reason why I keep writing—to satisfy readers who ask when my next mystery will be out. As I said earlier, I aim to entertain and hope readers chuckle as they read my books rather than dread the outcome. I believe in happy endings. I like them in books that I read, and I enjoy romantic subplots as well. So I include these in my stories. As for critical respect, you are correct. Cozy mysteries are the underdog compared to serious crime fiction. So much so, that not a lot had been written about them. This is why I wrote Writing the Cozy Mystery. It teaches how to write a whodunit and what makes a cozy mystery distinctive from other genres. Readers deserve stories that take them away from their daily toil and the horrible events in the news. Cozies provide a light-hearted escape while also giving the reader a puzzle to solve.

You’re quite active on social media and speaking at bookstores and other events. Do you enjoy such activities as a break from writing or sometimes feel there is too much pressure on writers to blog and post daily on Facebook or Twitter?

Social Media is critically important for getting your name out there. I wouldn’t do it so much if I didn’t enjoy it. I like the interaction with other writers and fans. It can be useful for getting reader feedback. There’s never been a better time when we could interact so directly with our fans. Yes, there are days when I don’t feel like tweeting or posting. So I back off for a short interval. But other days, I am gung-ho and go full speed ahead.

My blogs are like a journal where I chronicle my travels, the writing process, and life as a writer. I’ve always kept diaries or trip journals, so now it’s online and I can share my thoughts with others. My blog is another means of expression. And hopefully, new writers can learn something from my posts. Marketing can easily take over one’s schedule, however. My daily writing quota comes first. You have to set boundaries, or you can easily become lost in cyberspace. As for speaking engagements, I like meeting readers in person and telling them about my books.

I enjoyed your book trailers on YouTube. Were these hard to make? Have you had much feedback on them?

I just did one for PERIL BY PONYTAIL, and I’ve also done one on how to make a trailer. Basically, I use Windows Movie Maker. First you have to write the text. Then you search for images to match your characters and locales on the royalty-free sites. This can be fun but also time-consuming. Once you find the music, you can put it all together. As for feedback, I haven’t had much. In my view, video trailers are another tool in a writer’s arsenal. I don’t think they attract new readers as much as provide fans with a sneak preview of my next work.

You’ve written an informative, brief guide to mystery writing, Writing the Cozy Mystery, but is there one particular thing you wish you had known when you started writing?

Never say never. My agent once asked if I thought about writing a straight mystery series. This was back when I was still writing futuristics. I said no. Lo and behold, look what I’m writing now. So you never know what’s in the future. Be versatile and attend writers’ conferences in other genres. What you learn today might be put to use tomorrow.

In Writing the Cozy Mystery you stress the importance of the main character realizing something new about herself and showing personal growth in each book as well as of evolving relationships among recurring characters to carry the reader on to the next book. Does this become more difficult after several books and after Marla and Dalton have gotten married? How do you keep a long-running series fresh?

Marla’s relationships are always evolving, so I haven’t had a problem keeping the series fresh. The key is keeping the family dynamics real with all the conflicts we experience in our own lives. Friends come and go, new people pop onto the scene, and our priorities change through the different stages of our lives. So it is with Marla. You can’t have a static heroine with mysteries in each story, or readers will quickly tire of your series.

Every few books, I’ll set a story in a different location. Marla and Dalton have gone on a cruise, stayed on the west coast of Florida at a haunted resort over Thanksgiving weekend, and been to a dude ranch in Arizona. This keeps me from being bored with the same setting and fans as well. Plus I like to learn something new with each book, so I look for an angle that excites me.

You published the third book of the Drift Lord series in 2014. Are you still writing other books in addition to the Bad Hair Day series? Any other future plans?

I’m currently writing book 14 in the Bad Hair Day series. After PERIL BY PONYTAIL will be Facials Can Be Fatal. I’m working on the one after that, tentatively titled Hair Brained. In between Marla’s stories, I’ve been revising and updating my earlier mysteries into new Author’s Editions. This project will take me a while as I plan to do audio editions next via ACX. Then there’s a second mysteries series I’d like to work on. Hopefully, one day I’ll be able to do more Drift Lords stories, but I need a few clones.

Thank you for your time today.

And thank you for these great questions! 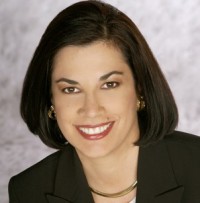 Nancy J. Cohen writes the humorous Bad Hair Day mystery series featuring hairdresser Marla Shore, who solves crimes with wit and style under the sultry Florida sun. Several of these titles have made the IMBA bestseller list. Nancy is also the author of Writing the Cozy Mystery, a valuable instructional guide on how to write a winning whodunit. Her imaginative romances have proven popular with fans as well. A featured speaker at libraries, conferences, and community events, Nancy is listed in Contemporary Authors, Poets & Writers, and Who’s Who in U.S. Writers, Editors, & Poets. Currently, she is President of the Mystery Writers of America, Florida Chapter. When not busy writing, Nancy enjoys fine dining, cruising, theme parks, and outlet shopping.

The September 2015 Edition of The Big Thrill