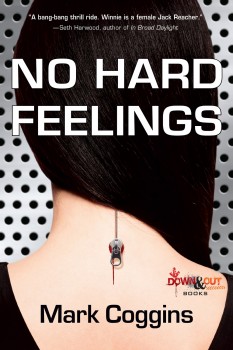 Mark Coggins’ work has been nominated for the Shamus and the Barry crime fiction awards, and selected for best of the year lists compiled by the San Francisco Chronicle, the Detroit Free Press and Amazon.com, among others. His novels Runoff and The Big Wake-Up won the Next Generation Indie Book Award and the Independent Publisher Book Award (IPPY) respectively, both in the crime fiction category.

In NO HARD FEELINGS, Coggins pairs his aging series protagonist August Riordan with a determined, aggressive young woman named Winnie who literally feels no pain. Told in alternating points of view, the book describes a cut and thrust battle to the death between these uneasy partners and a shadowy villain known only as “The Winemaker.”

What was the genesis of the book?

NO HARD FEELINGS continues a story I began in my second novel, Vulture Capital. In Vulture Capital, a venture capitalist hires Riordan to find the missing Chief Scientist of a biotech firm in which he has invested. The men determine that the scientist’s disappearance is part of a larger conspiracy to use the technology for perverse applications, including terrorism, slave labor and prostitution.

They ultimately unravel the conspiracy and stop the bad guys, but in NO HARD FEELINGS, the worst of them—The Winemaker—is back, as is Winnie, the human guinea pig on whom the technology was first tested.

Do we need to read Vulture Capital in order to appreciate NO HARD FEELINGS?

No, not at all. NO HARD FEELINGS doesn’t assume any familiarity with the characters or plot from Vulture Capital.

Riordan is in San Francisco in earlier books in the series. In NO HARD FEELINGS, you moved him to Palm Springs of all places. How did that come about?

By the end of The Big Wake-Up, the previous novel in the series, Riordan is depressed and rudderless. He has relinquished his office downtown and it’s not clear he’s going to continue to work as a private investigator. He has also come to grips with his relationship—or lack thereof—with his father. His father died and was buried in Palm Springs, so when Riordan drifts away from San Francisco, he gravitates to the place his father spent his final years.

You also have a different cast of characters around Riordan this time—Winnie and Ray instead of series regulars Chris Duckworth and Gretchen Sabatini. Why so?

By the end of the previous book, Riordan has alienated Duckworth and Gretchen (or at least feels he has), which is part of the reason for his depression. As for the new folks, Ray, a retired aerospace engineer, is an old friend of his father’s who lives in the same trailer park as Riordan. And Winnie, well Winnie comes hurtling back into his life as only she can.

Tell us a little about the technology at the core of NO HARD FEELINGS.

It’s a real technology to restore mobility in spinal cord injury (SCI) patients know generally as Functional Electronic Stimulation (FES). It allows SCI patients to regain conscious control of their arms and legs by bypassing damaged areas of the nervous system so the brain can communicate directly with the muscles.

In the real world, it is not as mature as portrayed in the book, but you can read more about the technology’s current capabilities and promise for the future on the FES page on the Christopher and Dana Reeve Foundation website.

At the beginning, at least, she is clearly the bad cop and he the good.

I think of Winnie as being somewhat like the Linda Hamilton character in the Terminator movies. Both women have had their eyes opened to a threat that others don’t recognize in very violent and traumatic ways. Rather than buckling, they have toughened themselves mentally and physically to meet the threat.

Part of the dynamic between Riordan and Winnie is due to the fact that he doesn’t yet understand the threat as well she does, nor has he personally suffered the losses she has. Part of it is simply that his worldview is more nuanced, more tolerant of moral ambiguity and shades of gray.

One thing I hope the reader will find interesting is how they affect one another throughout the course of the book, both in terms of outlook and their feelings for each other.

It seems to me the stakes in NO HARD FEELINGS are higher than in some of your other novels. To quote Winnie, “It’s more than just you and me. It’s f#%king geopolitical.” Would you agree?

Yes, I would, primarily due to the plans The Winemaker has for the technology. He is obsessed with defeating Islamic militant groups like ISIS and has allied himself with the disgraced former leader of a US private military contractor. If he succeeds in doing what he plans, it has the potential to (further) destabilize the Middle East.

Riordan and Winnie cover a lot of ground in the book, including extended visits to the California wine country and a Nevada brothel, both places that require specialized knowledge to portray with verisimilitude. How did you go about acquiring it?

Well, as I would never personally visit a winery, I had to find people who…

Kidding. There is a fair amount to do with wineries and winemaking in the book, but I had done extensive research on the industry for Vulture Capital and was able to leverage that for the new book.

As for learning about (legal) brothels in Nevada, I relied on Internet research for a large part of it, including chat groups where men who visit them talked about their experiences, and I also talked directly with several customers. This was useful mainly to understand house protocols and negotiations from a client perspective.

You’ve illustrated some of your previous novels with photographs. Did you take them for NO HARD FEELINGS?

Yes, each chapter has a scene-setting black and white image. And Down & Out Books, my new publisher, has made a point of printing them on full pages as opposed to partials as was done in the past.

Finally, as the old saw goes, books are judged by their cover. Yours is very evocative. Who did the design?

I’m very pleased to say it was done by award-winning designer Michael Kellner, who did all the great books in the Dennis McMillan list. 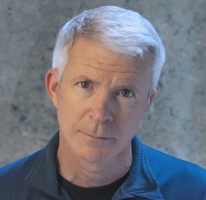 Mark Coggins’ work has been nominated for the Shamus and the Barry crime fiction awards and selected for best of the year lists compiled by the San Francisco Chronicle, the Detroit Free Press and Amazon.com, among others. His novels Runoff and The Big Wake-Up won the Next Generation Indie Book Award and the Independent Publisher Book Award (IPPY) respectively, both in the crime fiction category. The Immortal Game was optioned for a film.