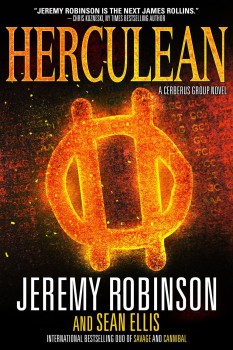 THE SECRET MUST BE KEPT…

For three thousand years, the Herculean Society has preserved the legacy of the ancient hero, Hercules, protecting history’s fragile relics from humanity, and humanity from the dangerous truths behind the legends. Now, the Society’s new leader, archaeologist George Pierce, faces his first test: the Cerberus Group, a shadowy organization with two goals: the collection and distribution of black market relics, tech and secrets, and the purge of those deemed unfit for survival.

Pierce and his niece, Fiona—the last guardian of the ‘mother tongue,’ the forgotten language of creation—discover a secret entrance to the legendary Labyrinth, and at its heart, a hidden trove of relics that point the way to Hercules’s greatest discovery: a mutagen that can rewrite the very code of life. When a surprise attack leaves Pierce and Fiona trapped in the deadly maze, fighting for their lives, the race to stop the Cerberus Group begins.

To defeat this new enemy, Pierce must assemble a team of experts including Felice Carter, a geneticist with a dangerous secret, Augustina Gallo, a mythology professor, Cintia Dourado, a high tech hacker, and Lazarus, a dead soldier returned to life.

Guided by their knowledge of science, history and mythology, Pierce’s team sets out on an epic journey, following in the footsteps of Hercules, to stop Cerberus from controlling the power that rises from the Well of Monsters.

…OR THE WORLD WILL BE CLEANSED.

Jeremy Robinson and Sean Ellis, the international bestselling team behind the Jack Sigler thrillers, including Savage and Cannibal, return with a new series that rewrites the way we see history. Rivaling the best of Matthew Reilly and James Rollins, Herculean combines a blistering pace with fringe science and myths reborn.

HERCULEAN is available from Amazon, Barnes & Noble and Kobo.

His series of Jack Sigler / Chess Team thrillers, starting with Pulse, is in development as a film series, helmed by Jabbar Raisani, who earned an Emmy Award for his design work on HBO’s Game of Thrones. Robinson’s original kaiju character, Nemesis, is also being adapted into a comic book through publisher Famous Monsters of Filmland, with artwork and covers by renowned Godzilla artists Matt Frank and Bob Eggleton.

Sean Ellis is the international bestselling author Magic Mirror and several thriller and adventure novels. He is a veteran of Operation Enduring Freedom, and he has a Bachelor of Science degree in Natural Resources Policy from Oregon State University. Sean is also a member of the International Thriller Writers organization. He currently resides in Arizona, where he divides his time between writing, adventure sports and trying to figure out how to save the world.

Visit him on the web at seanellisthrillers.webs.com