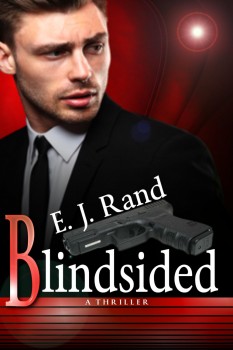 When Detective Sergeant Aidan Whitley and Detective Jeri Laurent fell in love, she mentioned her past. How an affair with a married ex-California police captain went so bad that she fled to New Jersey. That doesn’t matter to him until he intercepts a drug shipment and the truck has California plates. Next day, Jeri’s father, a California Deputy Attorney General, calls and invites them to a family reunion. Once there, Aidan finds he’s in a fight to the death—Jeri’s ex-lover wants her back. Aidan’s unsure which man she’d choose. The question may be moot if he doesn’t survive.

BLINDSIDED is available from Amazon and Amber Quill Press.

After graduating Wharton, a tour as a U. S. Navy destroyer officer, and business careers in management consulting and public relations, Rand began writing fiction in 2004. From 2006 through 2010, Deadly Ink Press published four of his thrillers and Rand was honored in five award contests. After DI Press suspended operations, Rand continued writing, and in 2015, Amber Quill Press published two of his thrillers, HONEY TRAP and BLINDSIDED. He’s working on sequels. He’s married and lives in northern New Jersey.