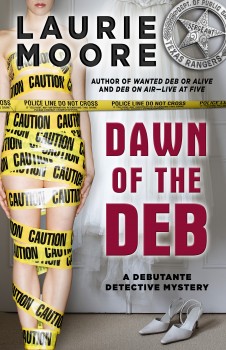 Laurie Moore is a cop turned investigator turned lawyer turned thriller writer. At the age of six, Moore wrote her first novel in orange crayon on blue construction paper and gave the mystery-horror hybrid to her father for his birthday.

Since then this sixth-generation Texan has come a long way. Reared in South Texas and graduated from the University of Texas at Austin with a B.A. degree, she rebelling against her parents’ wishes that she become a Spanish teacher, Moore joined the police department. For six years, she worked street patrol and criminal investigations until the brass decided to promote her to the rank of sergeant (their way of getting a maverick officer to comply with standard operating procedures). Bad move.

She later worked as a DA Investigator in Austin, Lockhart, and San Antonio before moving to Fort Worth in 1992 to attend law school at Texas Wesleyan University School of Law. She is currently in private practice and lives with her husband and two rude Welsh corgis, and recently retired as a licensed, commissioned peace officer after thirty-four years in law enforcement.

Tell us about your fourth book in the Deb series, DAWN OF THE DEB.

Dainty Prescott is a privileged celebutante, broadcast journalist for WBFD-TV, and the owner of the Debutante Detective Agency. In need of money, she accepts and squanders a retainer from oil baron, Avery Marshall, and becomes obligated to groom his awkward stepdaughter, Dawn, for the upcoming, uber-exclusive Rubanbleu ball. To kick off the training, Avery sends Dainty, Dawn, and Dainty’s socialite friends away for a spa weekend, but the trip goes terribly wrong when the girls witness killers storm the lodge and execute the owners and staff. As they run for their lives, Dainty quickly discovers that Dawn is mentally ill and un-medicated, making her as dangerous as the men they’re fleeing. Celebutante Dainty and her socialite friends must move quickly to unravel the reason behind the resort murders, while staying one step ahead of four men in black ski masks who want them dead.

DAWN OF THE DEB is a fast-paced thriller that offers a look into the world of Dissociative Identity Disorder, what was formerly known as multiple personality disorder.

When did you first start to imagine yourself as a writer?

In my formative years, I wanted to be an International spy-ballerina. But every evening, my father would come home after work and read a book, so I decided if reading was important to him, it should be important to me. I saved my $.50-cents-per-week allowance and bought books through the school’s Scholastic Reading program. Every six weeks, three huge boxes would arrive; two would go to my classmates, but the third would be all mine. Boys would offer to carry them home for me, so I got to hang out with guys at an early age. Lugging around books was probably my first femme-fatale act.

After my father died, I found my construction paper book in a shoe box with my his World War II medals when I helped clean out his closet. I realized he thought what I’d written was important, and that I should write. But I was young, and although well-traveled, I didn’t think I had enough experience for people to want to pay to read what I wrote. Along the way, I made a conscientious decision to do things that would make me more interesting to me. That’s when I took a detour into law enforcement. One night, as a rookie police officer patrolling alone, I got into a high-speed chase and ended up arresting a bank robber who’d held up banks from Pennsylvania, to Kansas, to Texas. I didn’t know this until I received an FBI commendation the next day, and that’s when I thought, Wow, I’m pretty interesting…

Is Dainty Prescott, or any of the Prescott family, based on a real person?

Dainty Prescott began as a character loosely-based on my daughter, Laura, but only to the degree that Laura was a debutante around the same age, and her picture appeared on the cover art of Deb on Arrival–Live at Five, and Wanted Deb or Alive.

Dainty’s grandmother is a compilation of every crazy person I’ve ever known, and her father is probably subconsciously based on every bad date I ever had.

With all your years in law enforcement, are there cases that stood out enough to make it into your fiction?

Certainly. I feel compelled to write in order to clear out all of the stuff rolling around in my head so I can sleep at night. That, and writing keeps me out of honky-tonks.

What is the strangest case you’ve worked on?

I investigated a double homicide where a thirteen-year-old boy murdered his parents. The case had overtones of the occult, and I was a ritualistic crimes expert. For an only child who had everything he ever asked for, the defendant’s goal was to be free from supervision. Imagine how that worked out when he was arrested, jailed, convicted, and did time.

Of the many and varied types available, what three flavours of sausage would you use to describe your work?

You are driving down the road one night, when before you falls an awful sight, a man with bag dripping something foul has his thumb out, hitchhiking. As if controlled by a power outside your logical self, you slow down and ask where is he is headed. He says, “Anywhere west of here.”

What is your next move?

“Well, good luck with that,” <door locks snap shut> followed by, “What’s in the bag?” And then, “What’s your name?” And a final, “See-ya,” as I zoom off speed-dialing the Sheriff. 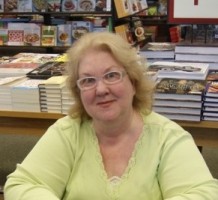 Sixth-generation Texan Laurie Moore received her B.A. from the University of Texas at Austin and entered a career in law enforcement in 1979. In 1992, she moved to Fort Worth and earned a degree from Texas Wesleyan University School of Law in 1995. She is currently in private practice in “Cowtown” and lives with her husband and two Welsh corgis. As a licensed, commissioned peace officer, she recently retired from law enforcement after 34 years. She is the author of 13 novels.