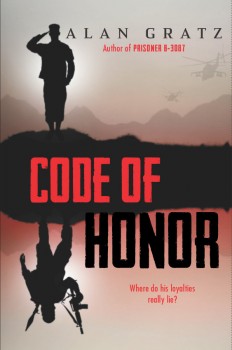 August saw the debut of Alan Gratz’s young adult thriller CODE OF HONOR. The author of a number of historical adventure novels for young readers, Alan answered a few questions for The Big Thrill about the challenges and opportunities in writing a ripped-from-the-headlines contemporary thriller for teens.

What is CODE OF HONOR about?

Persian-American high school senior Kamran Smith is on top of the world until his brother, Darius, a U.S. Army Ranger, goes on TV claiming credit for an attack on a U.S. embassy. Now everybody thinks Darius is a terrorist, and that Kamran must be one too. When the Department of Homeland Security brings Kamran and his family in for questioning, he begins to see his brother in a whole new light. But Kamran is still unconvinced the brother he grew up idolizing could be a terrorist. With the help of a sympathetic CIA operative, Kamran goes on the run from the government to prove his brother’s innocence. But where do his brother’s loyalties really lie? That’s a question only Darius can answer—if Kamran can find him before everyone else does.

Where did the idea for CODE OF HONOR come from?

It began with the idea of writing something like Showtime’s Homeland for young adults. A realistic, contemporary thriller with spies, terrorists, secret loyalties, heartbreaking betrayals, and real stakes—all starring a seventeen-year-old protagonist. But any time you write a book with high stakes involving a young main character, you have to answer one big question: why is the kid solving this problem, and not the adults in his life? Why not his parents, or the police, or the CIA? So to be able to write a “YA Homeland,” I had to have a compelling reason for Kamran to not just be involved, but to be the only person who could save the day.

My idea was to have Kamran’s older brother, Darius, sending secret coded messages in his terrorist videos—coded messages based on the make-believe adventures he and Kamran used to have in the backyard as children. So now Kamran is involved whether he wants to be or not. Kamran is literally the only other person on the planet who could ever translate Darius’s codes. As CIA agent Mickey Hagan tells him, “That’s the best kind of code. Unbreakable.” It also makes Kamran indispensible to the story, seventeen years old or not.

How did you research the “Persian American experience” to write Kamran and his brother Darius?

While I was still doing research on CODE OF HONOR I got a fan letter for another book of mine from a Persian-American teenager in Pittsburgh. He related his mother’s experience fleeing the Iranian Revolution and the rise of the Islamic Republic in the 1970s to the persecution one of my characters experienced, and talked about the prejudice he sometimes faces as someone of Persian descent in America. I immediately wrote back and asked him if I could interview him as research for the character of Kamran. His stories about how other children and adults treated him and his family after 9/11 gave me the perspective I needed to explore the suspicion and fear that follow Americans of Middle Eastern descent everywhere they go.

I also used the childhood games Darius and Kamran played to bring some Persian mythology into the story. By mixing the Persian epic hero of Rostam with the pop culture “mythology” all Americans share—like Star Wars, Batman, and Harry Potter—I was able to make the story truly “Persian-American.”

Thank you, Alan, for speaking with The Big Thrill. 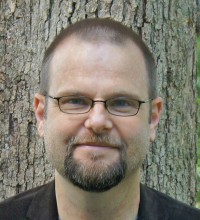 Alan Gratz is the author of a number of novels for young readers, including Samurai Shortstop (ALA 2007 Top Ten Best Books for Young Adults), Something Rotten (ALA 2008 Quick Pick for Young Adult Readers), The Brooklyn Nine (Booklist’s 2010 Top Ten Sports Books and Top Ten Historical Books for Youth), and Prisoner B-3087 (YALSA’s 2014 Best Fiction for Young Adults). His latest novel is the YA thriller CODE OF HONOR. A Knoxville, Tennessee native, Alan is now a full-time writer living in Western North Carolina with his wife and daughter.