The Dangerous Life of a World War I Nurse 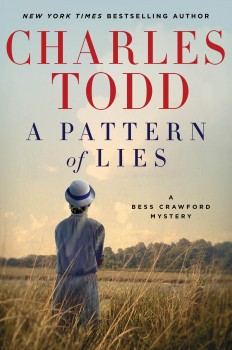 Caroline and Charles Todd certainly aren’t the first mother/child team to co-write fiction—but for this duo, with more than two dozen thrilling books under their collective belts, writing together is a natural progression of their already close relationship.

As long as they’re not in the same room.

With the release of PATTERN OF LIES, the team’s seventh book in the popular Beth Crawford series, Caroline and Charles took some time with The Big Thrill to reflect on what made them join forces creatively, where this book takes readers, and what fans can expect next.

“When we started working together, we were over 400 miles apart,” Charles says. “So in many ways it was like working on your own, with somebody else there to talk about it. We still can’t write in the same room though—too easy to get off topic.”

To their amazement, it was an easy transition, particularly given their family’s great love of storytelling.

“After the first couple of weeks, I don’t think it mattered to me that I was working with ‘Mom,’ ” Charles says. “”She’s smart, she had something to say and so did I, and soon we were so wrapped up in the characters and the story that our relationships was nowhere near as important as what was happening on the computer pages. Caroline was the person on the other end of the phone call or e-mail, and each conversation resulted in a new way of thinking or a change in direction of a fresh view of a character—and a challenge for both of us to get it right. That makes for good writing.”

As evidenced by their long-standing partnership and multiple bestsellers. Together, they’ve written two stand-alone mysteries, eighteen books in the Ian Rutledge series, and seven books featuring Bess Crawford, a World War I British Army nurse. As with all series characters, Bess has grown with each book, but her beginnings were inspired by a gap in Caroline and Charles’ own storytelling that they felt needed to be filled.

“When we began the Bess Crawford series, we realized the opportunity Bess presented to deal with two things we couldn’t do with Rutledge,” Charles says. “We could let her actually serve in that war in her own field, rather than look back on it. And Bess could tackle crime from a very different perspective, knowing the people and the situation in a way the police can’t.” 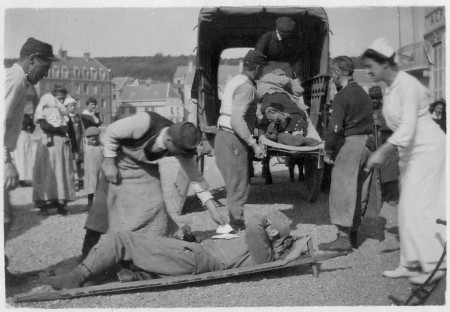 “We also wanted to be sure Bess was not brought up in the strict Victorian world where she had to break free of her upbringing and her outlook,” Caroline says. “And so we gave her a very different, but equally British background—the army and the Empire. It offered us a well-defined lead who could believably be a nurse and a sleuth.

In PATTERN OF LIES, Beth searches for the only witness to an explosion and fire in Kent, England that killed more than 100 men—because without this testimony, the blame will fall on Philip Ashton, the son of Bess’ former friend and patient.

As with each of the Todd mysteries, the book is inspired by real events and drenched in the rich research that has become a signature of sorts for Caroline and Charles.

“We always travel to the places we write about. It makes such a difference actually spending time there,” they say. “People tell you personal stories about the Great War or bring up a bit of history that never made it to the Internet, and watching the sun sets or judging the current in the river or where that alley goes can change the way an action scene plays out. We find our characters lurking the shadows too. It’s not just the plot we’re after.”

Though, sometimes they work in tandem. During one research trip, the Todd’s encountered a village that was unfriendly even before they’d stepped out of the car. It was such an unusual and intriguing experience, they built one of their Ian Rutledge books around it.

“Our setting help us determine characters and plot, as well as action,” they say, adding that the murder inquiry then determines which of their series characters will land the leading role. “It’s become a very pleasant routine, because we are both very fond of our characters and find them fascinating to work with. Also, changing hats, so to speak, keeps both series from growing stale.”

An important factor in an industry both would describe as “cut throat.”

“If you want to break in—or stay in—you have to be able to compete. That means knowing your market, understanding the tools of your craft, and being absolutely objective about what you write. Writing 350 pages doesn’t make you an author. Writing 350 really good pages can. Always remember that an agent or an editor is comparing your manuscript to the other hundred they read that week. Take that as a challenge.”

Caroline and Charles take their own advice to heart, never taking for granted the next book or fan support.

And with PATTERN OF LIES now in readers’ hands, the duo are back in their separate writing chairs, already hard at work on next summer’s Bess Crawford book, The Shattered Tree. Ian Rutledge fans can expect a new installment this upcoming winter with No Shred of Evidence, a story that takes the detective to Cornwall, where a shocking murder takes an unexpected twist. 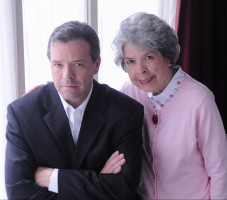 Charles and Caroline Todd are a mother-and-son writing team who live on the east coast of the United States. Caroline has a BA in English Literature and History, and a Masters in International Relations. Charles has a BA in Communication Studies with an emphasis on Business Management, and a culinary arts degree that means he can boil more than water. Caroline has been married (to the same man) for umpteen years, and Charles is divorced.

Writing together is a challenge, and both enjoy giving the other a hard time. The famous quote is that in revenge, Charles crashes Caroline’s computer, and Caroline crashes his parties. Will they survive to write more novels together? Stay tuned! Their father/husband is holding the bets.