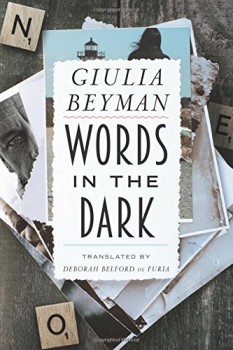 After the sudden loss of her husband, Joe, Nora Cooper makes a startling discovery: shortly before his death, Joe secretly sold their newly purchased dream home on Martha’s Vineyard, where the couple had planned to retire.

Nora doesn’t know what to think. As she searches for answers, she is tormented by grief and doubt—until she starts receiving mysterious and inexplicable messages in Scrabble letters, messages that Nora believes could have been written only by Joe.

Using a strength she didn’t know she had, Nora follows these strange clues to discover the truth about Joe and their life together—and navigates the danger inherent in her new, special gift.

“I do not want to go into too much detail on what happens in this book but it is filled with romance, secrets, betrayals, and messages from the dead.  I loved it and read it in a few hours because I could not put it down.” ~Linda Tonis for Paranormal Romance Guild

“Words in the Dark (Nora Cooper Mysteries), by Giulia Beyman, is a suspenseful, page-turning novel… I neglected my chores today to finish reading Words in the Dark. I was so sure I had figured out the killer several times, but didn’t see the ending coming. This is a really good book. Giulia Beyman has given us Nora: a mother, grandmother, working lady, and amateur detective. This is the first of the Cooper mysteries I have read, but it certainly will not be the last. I would not be at all surprised to see this as a movie or a network weekly series. The characters quickly became my friends and I can’t wait to visit with them again.” ~Trudi LoPreto for Readers’ Favorite

WORDS IN THE DARK is a B.R.A.G. Medallion Honoree. 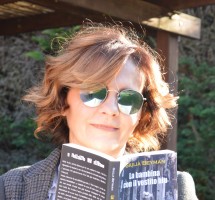 Giulia Beyman calls both Rome and Tuscany her home. She lives with her husband, her son and a large family of enterprising cats. Her passions are books, yoga and cinema.

She worked for about ten years as a freelance journalist, reporting the news and writing on books and fashion. Then after a brief stint in the publishing world, she started to work as a screenwriter for Italian television.

In Italian, she has published Amazon Bestseller “Prima di dire addio” and “Luce dei miei occhi”.
“Words in the Dark” is her first book translated into English, soon followed by “A Cry in the Shadows”, the second adventure of Nora Cooper, the intriguing real estate agent with the surprising gift of being able to communicate with the hereafter.