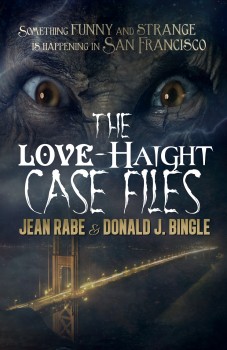 I had the pleasure of talking with two multi-published authors, Jean Rabe and Donald Bingle, who recently released—as a collaboration—THE LOVE-HAIGHT CASE FILES: Seeking Supernatural Justice. This novel is a fun ride with paranormal creatures known as OTs—Other-Than-Human—as they wreak havoc through the Haight-Ashbury district of San Francisco. As you can tell from the title, this novel has a lot to do with the law. You’ll meet Gargoyles, Ghouls, Vampires, Fey, Ghosts, and Zombies whose characters are so well developed they might sound like living and breathing humans until you read their colorful descriptions and realize they are anything but. Each one has a unique voice—some comedic, some mysterious, and some ominous.

There’s a mix of life in this district. The OTs live amongst the humans who perpetuate many of their problems. Attorneys Thomas Brock and Evelyn Love crusade and protect the rights of these OTs. We see them in the courtroom fighting for a father’s right to see his children, and in the streets overcoming danger as they protect the lives of gargoyles doomed to die when buildings they protect are demolished, fighting breed-specific legislation, and saving a vampire being framed. I’m not telling you more. You’ll have to read the book. The plot encompasses the real life concerns and emotions of many in an urban-fantasy world.

Rabe and Bingle recently answered a few questions for The Big Thrill.

Jean and Don, I’m thrilled to be talking with you today. With thirty-one novels and four thrillers and countless stories, respectively, I’d certainly appreciate your expertise as well as I’m sure our readers would. To start, how did your collaboration evolve for THE LOVE-HAIGHT CASE FILES: Seeking Supernatural Justice? How did you divide the labor, so to speak, and what roles did each of you have? What ground rules did you set for accountability?

Jean: We approached the novel as “cases,” and we divided the work that way. I’d take a case, Don would take a case, we’d banter ideas back and forth, and we’d proof each other’s work. Made for a clean manuscript, consistent characters and dialog, and allowed the book to come together smoothly.

Collaborations can be difficult. A writer friend of mine said they can be “twice the work for half the pay.” Indeed, they can be. But Don and I have similar tastes in fiction, and write in a similar, conversational style, so we didn’t have that problem. Too, we both finish what we start—a crucial ingredient for collaborating.

To help matters, Don worked as an attorney for a lot of years, so he could check the legal issues we covered to give it an authentic touch. I’d say believable touch, but we are taking about a dead attorney with monsters for clients.

Ground rules? That was easy…don’t kill one of the main characters without us both agreeing, and use the “bible” we’d developed and have added to for consistency.

Don: Jean’s never missed a deadline in her life, so I knew that I had no worries about the project dragging or never coming to completion. That meant it was just up to me to hold up my side of the bargain. Not so hard, since I’ve never missed a deadline, either. I think the keys to collaboration are to clearly define who is doing what and to honor each other’s strengths. Jean loves geographical research, for example, while I have some opinions on the oddities of how the legal system works, so it was easy for each of us to defer to the other in these realms of expertise.

In addition, both Jean and I have a strong background in role-playing games like Dungeons & Dragons and, when you think about it, a table-top role-playing game can be thought of as collaborative storytelling as the gamemaster runs an adventure and the players, via their characters, shape the course of the adventure by what they say and do. Collaborative games like that make collaboration in a work setting or on a project natural. Finally, I’ve written game material for a bunch of different role-playing game systems and tie-in fiction for the Dragonlance, BattleTech, and Transformers universes, so playing in someone else’s playground is something I’m used to.

I loved the development of your characters–the Gargoyles, Ghouls, Vampires, Fey, Ghosts and Zombies. What made you select this group of supernatural creatures? It’s a fascinating mix. Since they are so diverse and colorful, what method do you use to keep track of all your characters and descriptions? (Charts, diagrams, storyboard, etc.)

Jean: Aha…great question. Some of the creatures suggested themselves based on the area of San Francisco we were writing about. China Town, for example, was a natural for Chinese vampires. The gargoyles…there are lots of gargoyles in the city, and we use some real buildings with real gargoyles in the case.

As Don mentioned, we have played a lot of Dungeons & Dragons and other role-playing games through the years, so finding beasties to use was pretty easy. We keep track of the critters that have appeared through Z-Man’s OT Files. Z-Man is a character in the books, and he likes to record sightings and interesting tidbits about OTs. Here’s the link to his notebook.

Don: Just like in any good role-playing adventure, beasties are matched to plot, characters, and setting. Otherwise, it’s just a bunch of random monster encounters and that doesn’t grab the reader nearly as well. If literally anything can happen, a reader is less invested in figuring out what may happen. But when the monsters fit the setting and the situation, they become somehow more credible, even though they are completely fantastical.

Following the last question, Jean, what made you decide on writing in the fantasy genre? I read that you’ve written many sub-genres in fantasy. Which sub-genre do you prefer? Any childhood experience that you’d like to share that was pivotal in your decision?

Jean: I love writing fantasy. Most of my novels were traditional “high fantasy,” so urban fantasy is relatively new for me. I like it because it lets me do something different. I love trying different genres, and am even working on a murder mystery cozy in my spare time. Urban fantasy is my current favorite sandbox, and I can play with it on both coasts. LOVE-HAIGHT in San Francisco…the whole idea for this stemmed out of the notion of a hippie who died on the corner of Haight, and his ghost stuck around. I’ve another urban fantasy coming out this summer, Pockets of Darkness, set in New York. LOVE-HAIGHT has a light side, Pockets is dark.

I always read as a kid, and in second grade decided I was going to be a novelist. I got sidetracked for a while with the newspaper business, worked some years for TSR, Inc., in Lake Geneva, WI (Dungeons & Dragons), and since then have been writing and editing fiction full-time. So I’d say my childhood experience of reading is what spurred me. My mother taught me to read before I went to grade school, and indulged me with trips to the library where I’d come home with a stack of science fiction books.

THE LOVE-HAIGHT CASE FILES is based in law. Don, as a retired corporate attorney, what did you do to ensure the legal interpretation was on target? Or did you stretch the law for the sake of fiction? What research did you have to do that was beyond the scope of your practice? I know each state is different so to what extent is the novel based on “accurate law” where the story takes place, in San Francisco?

Don: Well, corporate attorneys are deal attorneys (mergers, acquisitions, sales of securities, joint ventures, etc.) not courtroom attorneys. In fact, I’ve never spoken out loud in a courtroom in a professional capacity. Sure, I whispered in a litigator’s ear a few times, I’ve spoken in Judge’s chambers, and I’ve had input on complaints, answers, and briefs, but it’s not like I can quote the Federal Rules of Civil Procedure verbatim. On the other hand, lots of stuff sticks with you from law school and you pick up a certain amount of information from your Continuing Legal Education and colleagues. The key is that legal thrillers (whether in literature or from Hollywood) aren’t about all of those minute nuts and bolts. Instead, they’re about big issues, like criminal intent, discrimination, and the conflict of stories between the warring parties. I grab what I need from some research, but no one needs to go to law school to understand the legal issues involved in THE LOVE-HAIGHT CASE FILES.

With an abundance of novels to your credits, and rave reviews, what advice would you give to aspiring authors regarding achieving publication that they could not get through a Google search?

Jean: Go to conventions. I learned more from listening to writers at science fiction conventions than I did from high school and college writing teachers. Seriously. Back away from the computer and go to a convention. Go to as many writing seminars as you can fit in a day. Horror, mystery, science fiction, fantasy conventions…the genre doesn’t really matter. The pros on the panels offer incredible advice.

Don: Too many people who aspire to be writers don’t really want to write, they want to have written. Sure, parts of the job are fun and exciting, but parts are an arduous slog, and you need to have the discipline to push through that and turn out a product. I have a pet peeve about people who think that writers just put down what the characters tell them to, like writers are mere scriveners for imaginary creatures. I think that view disrespects writers and the work they do. Stories aren’t hanging around in the ether, just waiting to be transcribed. They come from hard work. Only when you create three-dimensional characters, give each a unique voice, and put them in a situation where they are challenged to overcome adversity, then work to find exciting ways for them to succeed and change despite those challenges are you going to get stories worth telling. Even then, getting things from your mind to the page requires training, practice, and effort. And, when you’ve accomplished that, you need to realize that your tale may still need a lot of work and take the time to both get and listen to comments from someone who is knowledgeable and is willing to speak the truth, whether or not that is what you want to hear.

What would you like our readers know about you?

Jean: That I like to read A LOT. That I like to type on a laptop on my back porch when the weather is fine…or even when it’s not so fine. That I play roleplaying games and boardgames, treasure musty museums, and that I love my dogs.

Don: Word-of-mouth and reviews are everything to a small press or indie author. If you like a book or story, tell someone. Tell everyone. A great book or story can change lives. A fun, entertaining read can make your day better. Respect the work and respect the author by buying their work and letting other people know that it was worth the price. 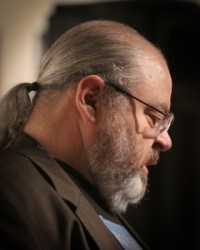