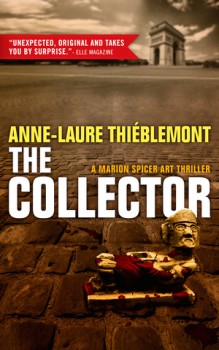 Marion Spicer spends her days examining auction catalogues and searching for stolen works of art. She is a top-notch investigator when it comes to eighteenth-century art. But for her it’s just a job and her life is well ordered. All this changes when she inherits a huge and very prestigious collection of pre-Columbian art from a father she never knew. There are conditions attached: she must first find three priceless statues.

That is when her troubles begin. Her father’s death sparked much greed, and Marion finds herself facing the merciless microcosm of Paris art auctions and galleries, with its sharks, schemes, fences, traps, scams, and attacks. Her quest draws her into a world where people will kill for a love of beauty.

“The story is captivating, with twists and turns and murders, along with a dive into the little-known world of art specialists and counterfeiters.” ~Elle Magazine (Readers’ Panel)

“A well-written plot with all the necessary ingredients: a few deaths, lost objects and a whole collection of worrisome characters…Ideal for a moment of relaxation.” ~Elle Magazine (Readers’ Panel)

“A good first mystery set in the cut-throat world of art collectors. Anne-Laure Thiéblemont depicts well the power struggles, scams and greed, and pulls readers in with the story of poor Marion Spicer who didn’t ask for anything.” ~L’Ours Polar

“As much a mystery as an identity quest, with tight suspense and strong writing, this debut novel by experienced art reporter reveals her qualities as a writer with a promising future.” ~Playboy

Born in Algeria in 1963, Anne-Laure Thiéblemont grew up in Madagascar, Lyon, Paris and Bogota. This childhood spent on the move left her with a taste for travel. That and her studies in art history were the two influences that would shape her career. She worked for a long time as an independent reporter for major French daily newspapers and magazines, specializing in art and gem trafficking. Afterwards, she spent thirteen years as a magazine editor-in-chief. She lives in Marseille, France, and since 2014 has been working on her own design and applied arts magazine. Writing is her passion, her own secret garden. The Collector is her first mystery, and was inspired from her investigative reporting into art trafficking and meetings she had with famous art collectors. When Anne-Laure is not writing, she is out searching for gems and designing jewelry she has made in Istanbul.

Sophie Weiner is a freelance translator and book publishing assistant from Baltimore, Maryland. After earning degrees in French from Bucknell University and New York University, Sophie went on to complete a master’s in literary translation from the Sorbonne, where she focused her thesis on translating wordplay in works by Oulipo authors. She has translated and written for web-based companies dedicated to art, cinema, and fashion as well as for nonprofit organizations. Growing up with Babar, Madeline, and The Little Prince, Sophie was bitten by the Francophile bug at an early age, and is fortunate enough to have lived in Paris, Lille, and the Loire Valley.