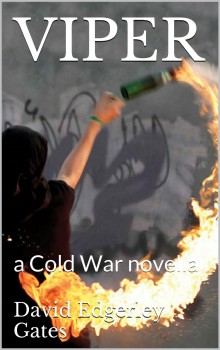 A Cold War novella. In early 1971, career intelligence officer Dix Apodaca gets drawn into a KGB deception operation in Berlin, when the Russians try to recruit a poster girl for the Revolution, active in the antiwar movement and very possibly the Red Brigades.

Once again, as in his excellent novel, “Black Traffic,” David Edgerley Gaates deftly captures the essence of the Cold War in divided Berlin, this time in the early 1970’s. Readers will recognize characters from the earlier novel, a continuity I personally enjoy. With the impact of .50 caliber slugs striking the battlefield, Gates move the story along at a rapid pace, trapping the reader in the plot and not permitting him to escape until the story is finished. This is definitely a single-sitting read. The story of how the KGB engineers a deception operation with a long-term goal is in no way far-fetched. The description of the radical anti-war movement in Germany in the 1970’s brings back chilling memories of those days and their tragic consequences. ~ Michael R. Davidson

VIPER is available from Amazon.

David Edgerley Gates lives in Santa Fe, New Mexico. The author of the Placido Geist bounty hunter stories, a series of noir Westerns, he is a past nominee for the Shamus, the Edgar, and the International Thriller Writers award. His short fiction appears regularly in ALFRED HITCHCOCK and ELLERY QUEEN mystery magazines, and has been widely anthologized. He recently completed THE BONE HARVEST, a sequel to his Cold War spy novel, BLACK TRAFFIC, set in the early days of the Soviet invasion of Afghanistan, and EXIT WOUNDS, a contemporary thriller about private security contractors, marketing off-the-shelf services to the spook trade. His next book is ABSOLUTE ZERO.