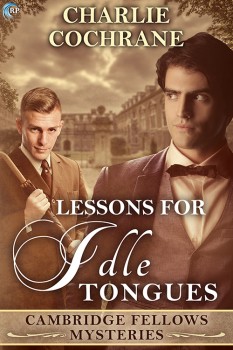 Murder and mayhem with the Cambridge lads!

Amateur detectives Jonty Stewart and Orlando Coppersmith seem to have nothing more taxing on their plate than locating a missing wooden cat and solving the dilemma of seating thirteen for dinner. But one of the guests brings a conundrum: a young woman has been found dead, and her boyfriend is convinced she was murdered. The trouble is, nobody else agrees.

Investigation reveals that several young people in the local area have died in strange circumstances, and rumours abound of poisonings at the hands of Lord Toothill, a local mysterious recluse. Toothill’s angry, gun-toting gamekeeper isn’t doing anything to quell suspicions, either.

But even with a gun to his head, Jonty can tell there’s more going on in this surprisingly treacherous village than meets the eye. And even Orlando’s vaunted logic is stymied by the baffling inconsistencies they uncover. Together, the Cambridge Fellows must pick their way through gossip and misdirection to discover the truth.

LESSONS FOR IDLE TONGUES is available from Riptide Publishing.

As Charlie Cochrane couldn’t be trusted to do any of her jobs of choice—like managing a rugby team—she writes. Her favourite genre is gay fiction, predominantly historical romances/mysteries. The slant for her mystery books is that her sleuths are gay and some of them live in an era where their relationship dare not speak its name. At least neither of them is a weresloth but that’s – literally – another story.

A member of the Romantic Novelists’ Association, Mystery People, International Thriller Writers Inc, she regularly appears at literary festivals and on library panels with The Deadly Dames.