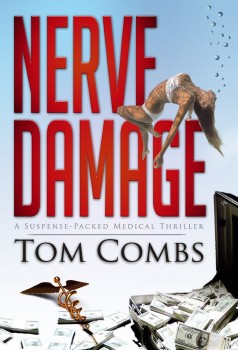 An emergency doctor with a past no physician is allowed to have.

A diabolical woman working in the shadows of the pharmaceutical industry who will stop at nothing to obtain the drug and the riches it will bring.

A young attorney’s startling death defies explanation – was she murdered?

The doctor, his wife, and their two young children are swept into a firestorm of murder, greed, intrigue, and violence – can they survive?

“Nerve Damage” mirrors the real world of emergency care with life or death action revealed with authenticity and emotion.

A medical suspense-thriller written by a physician-author with more than 20 years experience in level one trauma/acute care ERs.

When Drake’s helicopter rescue flight touches down poolside at a Lake Minnetonka estate, he finds the glamorous attorney representing his breakthrough dead of a suspicious drowning. Police suspect foul play and discover evidence of her hidden life of sexual obsession and criminal business dealings. Within hours, one of Drake’s research colleagues is shot and arrives at the ER near death. Drake battles to save his dying friend while gripped by fear that a devastating secret from his past has resurfaced.

The stakes ratchet ever-higher as Drake, his wife Rachelle and their two children become pawns in the deadly and high-stakes underworld of the pharmaceutical industry.

Authentic medical action, gut-wrenching emotion, and criminal intrigue leap off the pages of this suspense-packed thriller. Greed, betrayal, and violence confront courage and love of family as Drake and Rachelle battle to save what matters most–their children, their love and their lives.

NERVE DAMAGE is available from Amazon, Barnes & Noble and Kobo.

“If you love an edge-of-your-seat thriller, then look no further than “Nerve Damage”, penned by former ER doctor and novelist Tom Combs. The action sizzles with characters you really care about. Expect to stay up late reading this one.” ~ Jordan Rich, WBZ/WCCO/CBS radio celebrity – host of The Jordan Rich Show and its acclaimed “Book Club” feature

“I thoroughly enjoyed “Nerve Damage”. Tom’s daughter was my guest on “The Letterman Show” and gave us a copy. Most of the books we receive go unread, but I perused the opening pages and was hooked. Great plot and storytelling, and I cared about the characters. Eagerly awaiting the 2nd one. The first is now being read by my son-in-law…then my wife, then my friends, then… Keep working your magic, Doc.” ~ Alan Kalter, announcer/star of “The Letterman Show”, stage/screen/voice actor

Tom Combs’ career as an award-winning ER physician provides the foundation for his unforgettable characters and riveting plots. His emotional engagement arises from 25 years of battling to help and comfort those facing illness, trauma and tragedy.

To earn his way to medical school, Tom worked jobs using jackhammers, chainsaws, and heavy machinery. He then shifted to laboratory equipment and, eventually, to the stethoscope, scalpel and other tools of the Emergency Medicine specialist.

His current weapons of choice are the keyboard and a dangerously fertile imagination.

Nerve Damage, his debut thriller, is a story of high-level intrigue and edge-of-your seat suspense. The events are tomorrow’s headlines credible with surprises unfolding to the final page. Tom lives with his artist wife in Minneapolis/St. Paul. Visit his website at tom-combs.com

Tom has worked in construction, demolition and as a security supervisor at the Minneapolis Institute of Art. Later he worked as a research assistant to the dean of the College of Pharmacognosy at the U of MN.

His medical internship was served at HCMC where he was introduced to the fledgling specialty of Emergency Medicine (EM). For the next 3 years he received advanced training and served as an air rescue “flight physician” in the U of Cincinnati EM residency program. For most of the next 18 years he manned the ER of North Memorial Medical Center’s top-ranked level one trauma and medical facility.