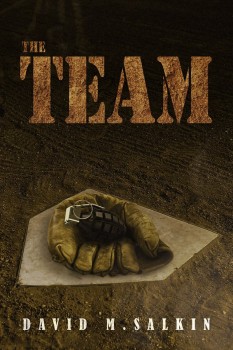 David M. Salkin’s three-book series, THE TEAM, begins its one-book-per-month debut in June of 2015, with books 2 & 3 being released in July and August through Post Hill Press.

A special team of elite warriors is assembled from the SEALs, Marine Recon, Army Rangers and the CIA to be used as a rapid deployment force when unconventional or covert operations are needed anywhere on the globe. Using the baseball team as a cover story, the Navy All-Stars fly to Qatar to find the leader of the New Wahabi Jihad and prevent a terrorist attack. Intelligence leads point to missing Sarin gas from Syria, and possible targets include The Al Udeid Air Base in Doha, as well as the new soccer stadium built for the FIFA World Cup in Qatar—a location chosen perhaps because of a few million dollars in bribery money.

Operating without the approval of foreign governments, The Team works covertly to try and locate the Sarin before a major attack can take place. With bodies piling up in Saudi Arabia and Qatar and the clock ticking, The Team plays hardball, on and off the field.

The Team is loosely based on a real covert military operation run in the sixties in Southeast Asia during the Vietnam War.

THE TEAM I, II & III is available from Amazon.

David M. Salkin is the author of eleven novels in a wide variety of thriller genres, including military-espionage, horror, science-fiction, crime and mystery. He has been published by Penguin Books, Post Hill Press and Permuted Press. David is a Master Graduate Gemologist by trade, as well as an elected official in Freehold Township, New Jersey where he has served at Mayor, Deputy Mayor and Township Committeeman over the past 21 years. He has twice been a panelist at Thrillerfest, as well as at Books-In-The-Basin, in Midland and Odessa, Texas. When not writing or working, Dave prefers to be underwater. He is a Master Diver and self-proclaimed Fish-Geek.