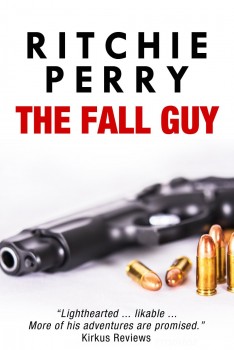 A tale of high adventure about a man who is blackmailed by British intelligence into helping to smash an international drug-smuggling ring in Brazil. The man is Philis, a British expatriate living in Santos. All he wants is to be left to mind his own business which happens to be a thriving black-market operation, importing necessities such as Scotch whisky and American cigarettes. His nemesis is Pawson, the head of SR(2), who isn’t at all scrupulous about what pressure he brings to bear. It doesn’t take Philis very long to appreciate that he’s been set up as a very expendable fall guy.

“The best newcomer to the thriller scene for many a year.” The Times

“This delicious bit of nastiness in the Latin drug smuggling scene kept me up all night. Tense suspense if ever there was.” Robin Moore (Author of The French Connection)

THE FALL GUY is available from Amazon.

“Plenty of low life and a good share of high tension.” H.R.F. Keating

Born and bred in Norfolk, England. Educated King Edward VII, King’s Lynn and St John’s College, Oxford. Two years in Brazil working as trainee Manager for the Bank of London and South America. On his return to England went into education. He is married with two daughters and two granddaughters. Has had c. 40 books published. Sixteen of these were thrillers under his own name which were brought out in England and USA.Various titles were translated into French, Italian and German. A further two titles were published under a psuedonym.