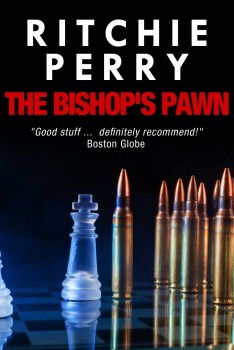 Philis had been enjoying himself in Tokyo and he wasn’t best pleased when Pawson,the head of SR(2), reassigned him to East Berlin. A duly constituted court of the German Democratic Republic had already sentenced Philis to death in absentia.As he’d pointed out to Pawson,affording target practice to an East German firing squad wasn’t one of his life’s ambitions.And this was before he’d even heard of Mueller, the Bishop he was supposed to nursemaid,a slightly unconventional cleric who’d graduated from mass murder to links with international terrorism.It wasn’t long before Philis found himself enmeshed in an explosive sequence of events which led him halfway across Europe before culminating in a murderous treasure hunt in the Italian mountains.

“Philis is an archetype:the independent,capable operative who can kill,who can flout authority,who is the hero of every man’s dreams.” Newgate Callendar, The New York Times Book Review

THE BISHOP’S PAWN is available from Amazon.

“This is the seventh novel in the series featuring Philis,the maverick operative of SR(2), the super-secret adjunct of British intelligence,and it is also the best.Philis is the most likely candidate to supplant James Bond.”
The Miami Herald

Born in King’s Lynn,Norfolk and educated at St John’s College,Oxford. He has traveled widely in Europe and Latin America and currently lives with his wife, Lynn, a hundred metres from the sea in North Norfolk. The author of many children’s books and a geography book about Brazil,he’s written eighteen thrillers,a dozen of them featuring Philis.

The Fall Guy by Ritchie Perry