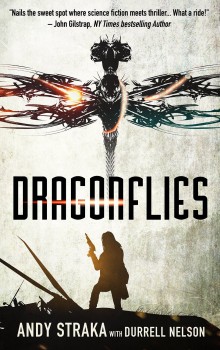 Former Army helicopter pilot Raina Sanchez, grounded after being shot down and desperate to be back in the air, plunges into a brave new world of stealth-killing micro-drones.

But her loyalties take a potential detour when she begins to understand a chilling reality. In an America where surveillance devices as small as insects are secretly piloted into places most would never imagine, public and private forces large and small are maneuvering to control them with inevitable consequences.

With personal allegiances and even love weighing in the balance, Raina soon confronts a threat that may alter the course of history.

“She studied the MAVs for a few moments. They were beautiful in their own way, she thought…What happens when the machines we build become more like us?”

DRAGONFLIES is available from Amazon.

“Mysterious government projects, conspiracy, and a hint of a future romance…a skillfully crafted plotline, suspenseful build-up and a climatic cliffhanger…. you can guarantee I’ll be impatiently
waiting to read the second in the series.”
– NetGalley Devours

ANDY STRAKA is the author of the widely acclaimed, best selling novel A WITNESS ABOVE and the Frank Pavlicek PI series. He has been named by Publishers Weekly as one of a new crop of “rising stars in crime fiction.” Straka is a native of upstate New York and a longtime resident of Virginia, where he co-founded the popular Crime Wave at the annual Virginia Festival of the Book. A technogeek and fan of all things flying, he is a licensed falconer who has hunted with Red-tailed hawks, Kestrels, and Harris’s hawks. He is a graduate of Williams College.