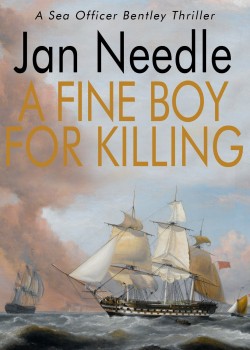 This is the first in my series of full-length historical naval novels to hit the electronic age. The series, about a sea officer in the 18th century British Navy called William Bentley, was started, and continues, as a riposte to the overly romantic view promulgated by many novels in the genre. Far from being a brave, good-hearted, humane young midshipman, destined to grow into a daring and brilliant captain and beyond, Bentley seems determined to become as cruel and despotic as his uncle Daniel Swift, who has secured him a place on the frigate Welfare.

Sailing to a unknown destination under sealed orders, Swift treats his crew with the utmost savagery, picking, like the consummate bully he is, on the weakest and most vulnerable in a crew of largely pressed men. One of them, a lost and lonely shepherd boy, he eventually beats to death, causing Bentley to go head-to-head with a smuggler called Jesse Broad who – out of horror and despair – is fomenting bloody mutiny.

It is a sealed world as the Welfare plugs down towards the Horn, and neither ship nor land is seen throughout the awful voyage. William Bentley is forced to confront the beast who is his uncle, and the beast that might be lurking in his own soul. In the end, he has to decide if Jesse Broad will live or die. If he makes the wrong decision, his own life as an officer and a gentleman will be ended.

A FINE BOY FOR KILLING is available from Amazon.

‘A fresh voice in maritime fiction…gritty, realistic, thoroughly entertaining. [Needle] does not flinch from…the uglier aspects of life aboard a man-of-war…just one of the reasons his work stands out from the crowd.’ – James L. Nelson, author of the Brethren of the Coast trilogy.

‘Rich, compelling characters and vivid imagery. There are no white knights here and no one-dimentional villains.’ – Publishers Weekly.

Jan Needle was born in Portsmouth, England, and started writing plays at university. He graduated to novels with an alternative version of Kenneth Grahame’s The Wind in the Willows called Wild Wood, then wrote for television and stage. At thirty he was writing thrillers, unflinching examinations of viciousness and cruelty from World War II through drug and gang crime. A Fine Boy for Killing, was described by one critic as ‘Jack Aubrey with the gloves and rose-tinted spectacles torn off.’ He is now well into a series of ebooks based on Nelson’s life, in tandem with short sea thrillers about Charlie Raven. Most recent is a book about Napoleon, planning to escape from St Helena in a submarine. Believe it or not, it could have happened!