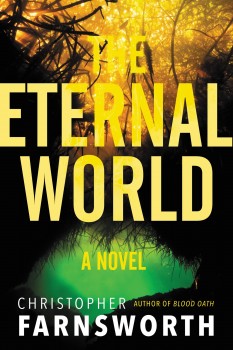 I think on some level, we all believe we’re going to live forever. There’s a kind of mental block we share that keeps us from looking too far down to the end of that road.

I’m not exempt. I’ve always had a suspicion in the back of my mind that I would outlive everyone I loved, that I would survive as everyone around me passed on. Then I held my newborn daughter in my hands. At that moment, it dawned on me that my clock was ticking faster than hers, and that she would see a world that I could only imagine.

That’s why I wanted to write what would become THE ETERNAL WORLD. There’s nothing like the prospect of your own mortality to get you thinking about eternal life.

In the book, the three main characters are all given a chance to sample the water from the Fountain of Youth. In 1527, a young conquistador named Simon stumbles upon the Fountain and the Native American tribe, the Uzita, who guard it. He betrays Shako, the woman who loves him and saves his life, and as a result, her entire tribe is slaughtered. Almost five centuries later, when the water runs out, Simon hires a brilliant researcher named David Robinton to duplicate it. David is faced with the greatest medical triumph of all time, if he can make it work. He could cure death itself—but only if he survives the centuries-old battle between Simon and Shako.

I’ve been very lucky: I’ve had very little direct experience with death. Aside from my grandparents, I haven’t lost anyone I love. And even my grandparents held on long past any reasonable expectations. My grandfather made it to 90 despite heart attacks and a broken back. My grandmother made it to 93. My father is still hammering up drywall in his seventies. My mother does more before breakfast than I manage to accomplish in an entire day.

It feels like tempting fate to write this, but my own genetic history means I’ll probably live a long, long time.

Of course, it’s not enough to live a long time: We’ve got to be eternally young, too. We spend billions per year on products —everything from Bulletproof Coffee and collagen protein shakes to Retinol and Resveratrol and Rogaine—that promise to make us glowing and perfect 19-year-olds again. (I admit I’d shell out a lot of money for something that could give me the hairline I had in high school.)

This isn’t groundbreaking news, but we do this because none of us want to die. That’s our basic humanity talking, hardwired into us at a level we barely understand, pushing us to survive.

But that primal, biological drive has become the foundation stone of all civilization. It’s the promise of every religion. It’s the beginning of all medicine and science and art. The quest for immortality is the subject of our very first story, The Epic of Gilgamesh, and it’s still the subject of all our stories. We want something of ourselves to remain, even in the face of death.

For me, the biggest draw of the idea of immortality was the chance to view history as an eyewitness. We are all time-travelers, but we only get to go one way. My great-uncle was born on a farm without indoor plumbing. Before he died, he invented the television, played with nuclear fusion in a lab at ITT, and watched men walk on the moon on the screen of his creation.

The characters in THE ETERNAL WORLD are all given that chance. They all have different reasons for wanting to live forever. Simon wants power. Shako wants revenge. David only wants to keep anyone else from suffering. And as a result, they are given the power to operate across the sweep of centuries. Their choices will shape the world, and affect millions of people, for better and for worse. They are driven up to the edge of what we would call human—and in some cases, they go beyond it.

But in their hearts, they are still driven by the very same thing that causes us to have children and build cathedrals and write symphonies: they want their lives to matter.

That’s what I learned by writing the book. The search for the Fountain of Youth is not actually about cheating death. In the end, it’s the same thing we’re all looking for, every day of our lives—it doesn’t matter how long we live if we don’t have something worth living for. 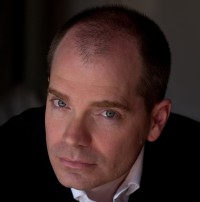 Christopher Farnsworth is a journalist, screenwriter, and the author of the President’s Vampire trilogy, which has been optioned for film and TV and translated into 12 languages. He lives in Los Angeles with his wife and daughters.