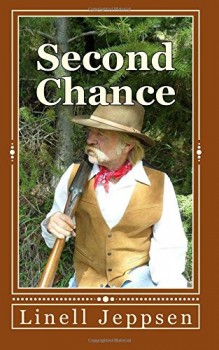 The Wilcox and Son Detective Agency is working on its second case file, but Matthew and his son Chance are beginning to think they might have bit off more than they can chew.

Their investigation into a series of claim-jumps near the booming mining community of Wallace, Idaho, suddenly turns deadly as one witness after another turns up dead. It turns out that the theft of land and mineral rights is only the beginning of a much deeper conspiracy…

Matthew and Chance follow the leads as best they can, knowing full well that their investigation has turned into a game of cat and mouse … but who is the cat in this deadly contest?

Starting in the deep woods of North Idaho and culminating in the finest, most exclusive ballrooms of high society in Seattle, Washington, follow Matthew and Chance Wilcox as they match wits against one of the worst criminals they have ever faced!

Linell Jeppsen is a writer of science fiction and fantasy. Her vampire novel, Detour to Dusk, has received over 44- four and five star reviews. Her novel Story Time, with over 130- 4 and 5 star reviews, is a science fiction, post-apocalyptic novel, and has been touted by the Paranormal Romance Guild, Sandy’s Blog Spot, Coffeetime Romance , Bitten by Books and 64 top reviewers as a five star read, filled with terror, love, loss, and the indomitable beauty and strength of the human spirit. Story Time was also nominated as the best new read of 2011 by the PRG! Her dark fantasy novel, Onio (a story about a half-human Sasquatch who falls in love with a human girl), was released in December 2012 and won 3rd place as the best fantasy romance of 2012 by the PRG reviewers guild! Onio also sports over 50- 4 and 5 star reviews!

To learn more about Linell, please visit her website.