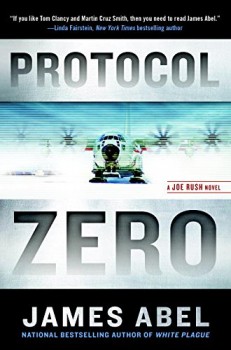 James Abel is a pseudonym for journalist Bob Reiss, who has covered the Arctic—the setting for PROTOCOL ZERO—for the magazines Smithsonian, Parade, Readers Digest, and Outside. He also wrote the nonfiction book The Eskimo and the Oil Man about the opening of the Arctic, advised 60 Minutes on Arctic issues, and has appeared as a guest on Morning Joe, Dan Rather Reports, Al Jazeera, and Nightline, discussing Arctic security and potential conflict.

PROTOCOL ZERO begins as a party of four scientific researchers, a family of three and their guide, makes a satellite call for help, but by the time Alaskan police arrive they are all dead. It looks like a murder/suicide, but then Marine bio-terror expert Joe Rush discovers that all the dead were sick with the most fatal disease on earth, yet one that never afflicts people in groups. At least until now. Through the ages, this very real disease has given rise to myth, terror, and folk tales.

Has the microbe evolved into something even more terrible, or has it been genetically engineered? And if the latter, who is behind it? More people are falling ill in Alaska. Soon the area will be quarantined, and the race will be on to stop the illness.

How did your work as a journalist in the Arctic lead to the plot for PROTOCOL ZERO?

The region is warming so fast that scientists believe that the next big outbreak of illness may come from a cold region, not a hot one. Add to that the competition between Arctic nations for territory, the race to get oil out of the ground there, the fact that the biggest new diamond mines on earth are in the Arctic…well, the real world provides all the elements of a thriller.

What did you do when you were in the Arctic?

I’ve gone out with Coast Guard missions several times. Once we flew to remote Eskimo villages along the Bering Strait. Another time I spent six weeks on an icebreaker, as scientists mapped the sea bottom. In Norway I met with researchers looking for new micro-organisms under the sea. They are actually seeking cures for diseases, but you never know how things can backfire.

The affliction in your book is also based on real science? You’ve been compared to Michael Crichton.

Well, he was the master. But yeah, real science. The disease that I’m writing about is probably one of the most frightening on earth. It has a much higher death rate than Ebola. I needed to understand how it works, how it has evolved up until now, and its symptoms and treatment.

Why write this under a pseudonym of James Abel, instead of your real name, Bob Reiss?

This summer I’m covering Arctic matters as a journalist. So the publisher and I decided to separate the serious, factual nonfiction from the novels apart. Of course, not that the internet reveals all, I’m unsure whether that makes sense.

Your hero Joe Rush was well received in his first appearance, White Plague. Will he be back for a third time?

I’m happy to say that The Sixth Prophet will be out in 2016. That novel will start off in Sudan and Somalia, where I also worked as a journalist.

So does Joe Rush. All the books take place, physically and conceptually, on the border between order and anarchy.

James Abel is a pseudonym for a best selling author and Arctic expert, who has covered the region for Smithsonian, Parade, Outside, and Readers Digest Magazines, and this coming summer, for Newsweek. He has appeared on Morning Joe, Dan Rather Reports and Nightline to discuss Arctic issues.