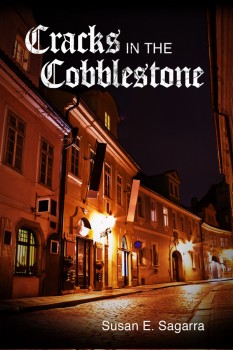 Susan E. Sagarra’s debut mystery novel, CRACKS IN THE COBBLESTONE, is the story of two vastly different women who have a mutual obsession with the Titanic tragedy. That calamity presents itself to each woman in different ways to help solve a long-forgotten mystery in the quirky river town of Tirtmansic.

Sagarra has always been intrigued with the historic catastrophe. “I have an unexplained fascination with, or connection to, the Titanic disaster, and my lucky number is 12,” she said. “When I set out to write my book, I looked at the calendar the day I started writing and it was April 12, 2010. So I decided to start part of the novel on April 12 . . . of 1912. I did not even think about the year’s significance until I researched important events and realized the Titanic sank on April 15, 1912, three days after I had determined my written journey would begin.”

But this was only one of several coincidences along the way. Several years earlier, when Sagarra was the managing editor of a St. Louis, Missouri-based newspaper, she had been invited to see the Titanic exhibit at the Saint Louis Science Center. “At the beginning of the exhibit, they give you a ‘boarding pass’ that depicts a real passenger who was on the ship and you have the opportunity to experience the event as that person,” Sagarra said. “The pass gives details about the person and my passenger, a woman named Mrs. Edward Beane (Ethel Clark), was one of just twelve newlywed brides on the ship. At the end of the exhibit, you find out if ‘you’ survived. She did.”

Sagarra dug out the boarding pass from her trunk of memorabilia and researched Ethel Beane. She ended up paying homage to Mrs. Beane in the book.

The next serendipitous event occurred when she received a gift from her brother. “He gave me a book called I Survived the Titanic, by Lawrence Beesley. Mr. Beesley described how he had survived in lifeboat No. 13, which spooked me. He was in the same boat as Ethel Beane. My brother did not know I describe this woman in my novel when he gave me the present.”

Sagarra hinted at yet another weird coincidence involving Beane that emerged during her research. “There is one more twist associated with this woman and her husband that relates to the title of my book, but you will have to read it for yourself to find out.”

Another interesting element is that the novel is set in a fictional town with a street that is modeled after Main Street in St. Charles, Missouri, where Sagarra worked as a newspaper reporter early in her journalism career. The fictional street, plus Mug’s Pub, the Main Informer office, the Brass Inn, and Annabelle Adams’ School for Young Ladies are inspired by real places that have personal historical significance for Sagarra.

“I used the old St. Charles Journal building, where I spent the first five years of my career, to visualize the fictional Main Informer and the Brass Inn,” she said. “Mug’s Pub is based on what used to be Rumple’s Pub on Main Street, where my girlfriends and I hung out after dance class and became friends with the proprietor. I have heard that the landlord of the Rumple’s Pub building had a replica of the Titanic in the private upstairs area. The grounds of the school are inspired by Lindenwood College, my alma mater. I have always loved the arched entranceway, the tree-lined road leading to the buildings, the swings, and the gazebo, which are described in the novel.”

Interestingly, her plot is propelled by some unexplained paranormal activity. “Documented ghost sightings on Main Street in St. Charles and at Lindenwood created a nice framework for me to incorporate paranormal activity, which drives my fictional reporter to the mystery that is begging to be solved,” Sagarra concluded. 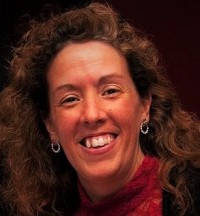 Susan E. Sagarra, a native of St. Louis, Mo., is a consultant in writing, editing and public/media relations. She previously was the first managing editor of a St. Louis-based newspaper, West Newsmagazine, for nearly 15 years and most recently was editor of the Show-Me Institute.

Sagarra has worked as the first communications director of the Gateway Section of the PGA; a sports editor for the Suburban Journals of Greater St. Louis (Saint Charles County bureau); and a public relations intern for the St. Louis Cardinals baseball team.
Sagarra has earned numerous journalism awards, including first place in the National Federation of Press Women-Missouri Chapter annual contest. She also received the Missouri Women Legislators’ Award for her coverage of Missouri state government.