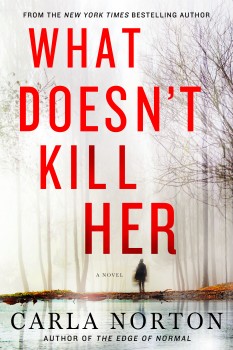 Carla Norton’s crime fiction series began with The Edge of Normal, which won the FWA Royal Palm Literary Award for Best Unpublished Mystery in 2012, was internationally released in 2013, and was a Thriller Award finalist for Best First Novel in 2014. The sequel, titled What Doesn’t Kill Her in the US and Hunted in the UK, is being released the end of June.

Carla has also written true crime. Most notably, she co-authored Perfect Victim, about a shocking case of kidnapping and captivity. The book was put on the reading list for the FBI’s Behavioral Sciences Unit and became a #1 New York Times bestseller. “That case gave me nightmares,” she says.

Now Carla morphs those disturbing facts into fiction. Her critically acclaimed series features a survivor of captivity who is called upon to help others and ends up matching wits with deadly predators. The protagonist, named Reeve LeClaire (aka “Edgy Reggie”), is introduced as a 22-year-old in The Edge of Normal and is a year older in the sequel. Bestselling author J.T. Ellison says she’s “a brilliant heroine who takes recovery to a whole new level.”

The first book was set in northern California, but the sequel is set mainly in Washington State. “I grew up in California, but lived in Seattle while finishing my MFA,” Carla says. “There was a creepy house in the neighborhood with an overgrown yard and ‘No Trespassing’ signs everywhere. It seemed perfect for a villain’s lair.”

At 23, Reeve LeClaire is getting her life back on track, relieved that Flint, her former captor, is imprisoned in a top psychiatric hospital. But he has been watching, waiting, and meticulously planning his getaway. Now he seizes his chance.

As he evades capture, baffling authorities and leaving a bloody trail through the forests of Washington State, she is hit by a fearful realization: She knows this psychopath better than anyone… and must risk everything to try to stop him.

A “high-octane sequel… But what Norton does best is to skillfully ratchet up suspense to a breathtaking climax…. A nonstop thriller.”
~Booklist, starred review

“Part sophisticated forensic thriller, part creepy psychological romp, WHAT DOESN’T KILL HER is one heck of a ride, with a brilliant heroine who takes recovery to a whole new level.”
~J.T. Ellison 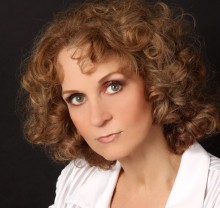 Carla Norton is a novelist, journalist, and true crime writer. Her debut fiction, THE EDGE OF NORMAL, was a Thriller Award finalist and a Royal Palm Literary Award winner. The sequel, WHAT DOESN’T KILL HER, is coming June 30th. Carla’s nonfiction books include PERFECT VICTIM, which was put on the reading list for the FBI Behavioral Sciences Unit and became a #1 New York Times bestseller. Carla earned her MFA in Creative Writing from Goddard College in 2009. Besides writing books, she writes articles, essays, and really bad poetry.