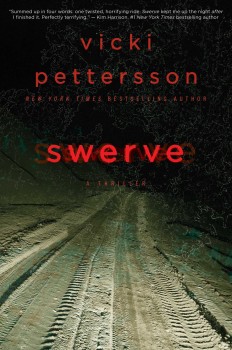 The third time I met Vicki Pettersson, she offered up a confession. Squished in at a small round table in a local coffee shop, she leaned forward conspiratorially and said, “I was so intimidated when first we met. I thought if you were anything like Munroe, you were going to hate me.” I shook my head and tried not to laugh.

This type of reader reaction happens often enough that it became material for a tongue-in-cheek piece about the many traits I share with a quasi-psychotic, knife-wielding, butt-kicking, anti-hero, but I never would have expected it from Vicki. Her stories are just as dark as mine, if not darker, her characters as smart and capable, and her readers often think the same thing about her when they first meet.

Backing up a step: Munroe is shorthand for Vanessa Michael Munroe, a woman in the vein of Jason Bourne, first introduced to Vicki when a bookseller put The Informationist in her hands and told her that in this international thriller was a character that could give her own ruthlessly tough heroines and large-than-life settings a run for their money.

Vicki penned dark fantasy and I wrote real-world blood and guts, but he was right: there was a lot in common between our badass female protags and the worlds in which we placed them.

When Vicki discovered that we were both based out of Dallas, Texas, she shot off an email, asking if I might like to meet for coffee. We’ve since become fast friends, so it’s particularly gratifying that as I celebrate the release of THE MASK (6/30/15) the sixth in the Vanessa Michael Munroe series, Vicki is bringing readers SWERVE (7/7/15) her first mainstream psychological thriller. Serendipitously, we’ll be joint-signing at Murder by the Book, in Houston, Texas, on July 14, coming full circle to the bookstore that first brought us together.

Vicki, you are very successful in the dark fantasy genre and your readers love and adore you. What spurred you to spread your wings and fly into the thriller writer’s coop?

I’m lucky to have some amazing readers who are willing to follow my words wherever they lead. That said, I never thought of myself solely as a fantasy writer. I was just telling stories, and always had an eye on eventually writing the type of thrillers I love to read (which is how I found you). In all honesty, I didn’t have the chops to write a book like SWERVE in ’07. I developed and honed the tools to do so with my other books. That’s why I was so impressed with the way The Informationist launched onto the New York Times bestseller list from the get-go, and deservedly so.

Well, it’s interesting because there was so much hoopla over the “strong female character.” In the thriller genre we have action-heroes like Jack Reacher, Jason Bourne, and James Bond, but there aren’t many women in that constellation. I think that’s why it was such a big deal when Vanessa Michael Munroe entered the scene. Yet fantasy is full of such larger-than-life women and you’ve been writing them for a while. Did that factor into the equation when writing SWERVE?

A strong female protagonist is never a factor for me, it’s a given. I’ve never written a weak woman. You and I have discussed this before … there’s no story in that! However there is a story in addressing what it means to be a woman in a man’s world. We navigate it differently by necessity, each woman does it differently, and I believe that’s what readers find fascinating—and that’s what’s so genius about Munroe, by the way. She’s utterly singular.

So if someone were to pick up SWERVE, what would you want them to know?

Save for the supernatural remove, all the core elements my extant readers like about my books are present: an Everywoman thrown into an impossible situation. A vividly drawn setting that is as much of a character as any other in the book, and hopefully—always—the emotional link that causes a reader to ask, “What would I do if this were me?”

I love your tagline: One road. One woman. One killer. Can you explain more about it?

Thank you. It’s more than a tagline, it was the premise that fueled this book, and my mental touchstone as I considered every scene—shoot, every line—for inclusion. This is a mainstream thriller with a ticking clock and a hard bite, so I wanted it to be a one-sitting read for as many people as possible. The tagline tells you: I am not kidding around here. Buckle up, you’re about to go on one seriously brutal ride.

Which brings us around to the question of violence. Neither of us backs away from violence in our prose. In my case the brutality is a byproduct of reality, but it seems at times that aggression at the hand of a woman is perceived differently by some readers than the same thing from a man. Did you approach the question of violence differently as you moved from a supernatural setting and into the real world?

I didn’t. As you mentioned before, I’ve always been a pretty dark writer, yet the reaction to the violence in SWERVE has been markedly stronger. There’s no longer the supernatural remove to soften the blow. The reader can’t say, “Oh, that could never happen.” It could. It does. And if it bothers you, good. Violence should always, always bother you.

Vicki Pettersson is the New York Times and USA Today bestselling author of the popular Signs of the Zodiac dark fantasy series and the “para-noir” Celestial Blues trilogy.

To learn more about Taylor, please visit her website.