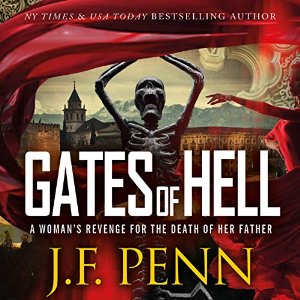 An ancient manuscript that leads to the Gates of Hell. A woman’s revenge for the death of her father.

When the last of the Remnant is murdered at the Sagrada Familia in Barcelona, ARKANE agent Dr Morgan Sierra is drawn into the hunt for a supernatural Key. She’s joined by agent Jake Timber, who must face his own fears as they decipher clues left behind by Kabbalist scholars.

From ancient sites in Spain, to Israel and the Czech Republic, Morgan and Jake must follow the trail to the Key, while evading Adam Kadmon, a man consumed with a lust for dark power.

As the planets align, Morgan and Jake race against time to find the Key and destroy it before the Devourers and the Polluted of God emerge from the Gates of Hell to ravage the earth.

GATES OF HELL is available from Amazon, Audible and iTunes.

“JF Penn writes like she has the hordes of Hades after her. Fast-paced, smart, and so much fun.” Simon Toyne, International bestselling author of the Sanctus trilogy

New York Times and USA Today Bestselling Author of thrillers with a supernatural edge. Oxford educated, British born J.F.Penn has traveled the world in her study of religion and psychology. She brings these obsessions as well as a love for thrillers and an interest in the supernatural to her writing. Her fast-paced ARKANE thrillers weave together historical artifacts, global locations, a kick-ass protagonist and a hint of the supernatural.