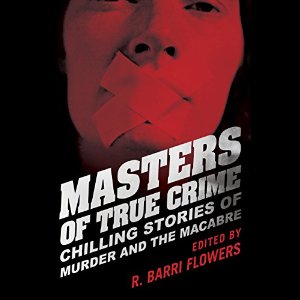 Masters of True Crime: Chilling Stories of Murder and the Macabre is a gripping anthology, edited by bestselling criminologist and crime writer R. Barri Flowers.

Spanning murder cases from the beginning of the 20th century to today, this is a must-hear for fans of true crime and will also be compelling to mystery and thriller listeners. The contributors include Harold Schechter, Katherine Ramsland, Carol Anne Davis, Burl Barer, Cathy Scott, Amanda Lamb, and other leading writers in this genre.

In February 1975, nine-year-old Marcia Trimble left her house in Nashville to deliver Girl Scout cookies in the neighborhood. She never returned. After a massive but fruitless search, her body was discovered on Easter Sunday. Outrage and horror gripped the community of Nashville, but the murder investigation was frustrated at every turn. The case went cold for three decades until it was finally solved.

In January 1997, Herbert Blitzstein was found murdered in the living room of his Las Vegas townhouse. A notorious mob insider, “Fat Herbie” had pursued loan sharking and other rackets for decades. Now, Blitzstein had been dispatched gangland style – by three bullets to the back of the head – in what appeared to be a classic contract killing. But the details of who killed him and why turned out to be much more complicated, and the real motives and circumstances remain murky to this day.

These are just two examples of the riveting stories assembled in this unparalleled collection of some of the top true crime writers in the world. Each of the 17 contributors draws on his or her own strengths, backgrounds, interests, and research skills to describe, in a vivid narrative, not only the facts of each notorious case but also the terrible emotions and macabre circumstances surrounding the crimes.

MASTERS OF TRUE CRIME is available from Amazon, Audible and iTunes.

“A riveting collection of short stories told by veteran crime writers. Once you begin to read this book, you will have trouble putting it down. . . . It is a disturbing, albeit fascinating, read.” —Kathleen M. Heide, PhD, professor of criminology at the University of South Florida and author of Why Kids Kill Parents

“This book should be a mandatory purchase and read for any true-crime buff. It is, indeed, an exceptional collection of true-crime stories.” —Steven A. Egger, PhD, associate professor and chair of the Criminology Program at the University of Houston–Clear Lake

R. Barri Flowers is an award winning criminologist and bestselling author of more than seventy books, including true crime, criminology, thriller fiction, and young adult mysteries. True crime titles include The Amityville Massacre, Murder Chronicles, Murder of the Banker’s Daughter, The “Gold Special” Train Robbery, The Sex Slave Murders 1, 2, and 3, The Pickaxe Killers, Murder at the Pencil Factory, Killers of the Lonely Hearts, and Dead at the Saddleworth Moor.