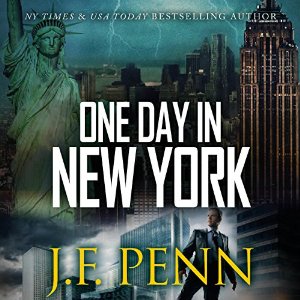 New York is built upon a dark secret. If this knowledge falls into the wrong hands, the city will crumble.

When a woman is crucified on a burning cross in downtown Manhattan, it marks the beginning of a dangerous crusade. The Confessors seek the powerful relic of a dark angel and they will stop at nothing to get it.

ARKANE agent Jake Timber is in New York to investigate the eleventh century Cloisters Cross alongside Naomi Locasto, a linguist, when they become entangled in the mystery.

As his past threatens to overwhelm him, can Jake find the relic of the angel before the Confessors destroy the city?

ONE DAY IN NEW YORK is available from Amazon, Audible and iTunes.

Oxford educated, British born J.F.Penn has traveled the world in her study of religion and psychology. She brings these obsessions as well as a love for thrillers and an interest in the supernatural to her writing.

Her fast-paced ARKANE thrillers weave together historical artifacts, global locations, a kick-ass protagonist and a hint of the supernatural.