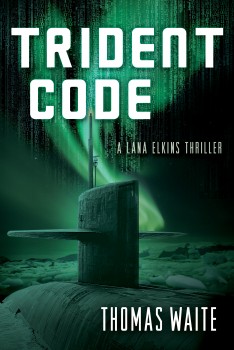 You know the feeling. When you lose a credit card, or your driver’s license, or find a charge on your bank statement that you don’t recognize, you feel exposed and vulnerable. You find yourself wondering: How exposed am I? What damage has been already been done? What damage is yet to come?

Governments and militaries are no different. Yes, they take greater precautions to protect their cyber interests, but it’s because the world (in many cases) is at stake. Today, the Internet is the new battleground, cyberwarfare the new fight, and computer code the new weapon. The shift in conflict also inspired a series of CODE novels by author Thomas Waite. We caught up with Waite as his latest novel, TRIDENT CODE (the second in the series), is set to debut. Below is our email interview with Waite (edited for length).

Growing up in Ipswich, along with your educational background, certainly gave you a great foundation to pursue a writing career. It seems that you took a respite from writing for pursuits in technology. What brought you back to writing?

In college, I poured my heart and soul into my creative writing courses. After graduation, I needed a job and my career in the technology sector was not at all calculated. But writing was a constant, at first ghost writing for others, and later under my own byline. If you read much of what I published in the Harvard Business Review, it is really storytelling. That can be as powerful in the business world as it is in literature. After building and selling a firm, I returned to my first love and started writing novels. And I love it!

What is it about computer code that is thrilling to you and makes it central to your novels?

With the advent of the Internet and much more sophisticated technologies, I recognized that cyberspace would become the next domain of terrorism and criminals with codes could wreak serious harm.

I decided that a series of cyberthrillers was exactly the thing that I was looking for. Most of the technologies, cyberattack vulnerabilities, and cyberwar scenarios in my novels are based on facts. I just received this review for Trident Code from an author with twenty-five-years as a top-ranked computer consultant: “Thomas Waite not only writes a searing story, but unlike too many technothriller authors, he cares about getting the little details right.” Those kind of comments make me happy.

How do you walk the line between explaining the technology to engage readers and deepen plot, without getting too detailed or “Inside Baseball”?

Some of my favorite novels are those that both entertain and educate the reader.

If a writer gets too detailed in explaining the technology, the novel can end up with turgid prose that slows the pace to a crawl, losing the reader in the process. When I write about the technology, I am very cognizant of shooting for the sweet spot of having enough material to give the novel veracity while not having the story go into the weeds.

Many military-based thrillers involve a large weapon targeted at a population center. While you certainly have a large weapon as a key part of the plot in TRIDENT CODE, you took a risk and chose an ecological target. Why?

Honestly, I was searching for a unique story with an unusual terrorist threat when I saw a startling news report about an environmental catastrophe that could arise from Antarctica, and realized that climate change could become a weapon of choice for terrorists.

Then I started looking at what countries might fare relatively well with a particular type of climate cataclysm. Russia stood out. With two kinds of terrorism for my novel—cyber and environmental—I wanted to go for the trifecta. Always the big winner, right? That was when a nuclear submarine equipped with Trident II missiles cruised into my novel. I had my story.

I’d grown up reading about the adventures of heroes like James Bond, Jason Bourne, the various Jacks you mention, and many other male protagonists. When I conceived of this series, I didn’t think the world needed another macho male figure. So I created my heroine, Lana Elkins, a former NSA operative who now heads a cyber security firm. She’s brave, smart, technologically a superstar, but still feminine, maternal, and human with flaws like anyone else.

Is there a scene or chapter in TRIDENT CODE that is a favorite or that is especially meaningful to you? Why?

I know this may sound strange coming from a writer of thrillers, but it isn’t an action scene. It is a revealing scene of my character Oleg driving through Moscow. As you know, in many ways a thriller is only as good as its antagonist. His personality really comes through in that scene in Moscow when his observations, insights, and mordant humor come alive on the page.

Fiction has always been a Trojan horse sneaking real-life issues into readers’ minds. What do you want your readers to think or feel after reading TRIDENT CODE? (Other than, “I can’t wait until the next Tom Waite novel comes out!”)

Perhaps the most obvious is for readers to understand the very real—and very frightening—threats that cyberwarfare presents. As much as I want to entertain my readers, it’s important to note that my novels are not just fast-paced cyberthrillers; they are cautionary tales for a public largely unaware of a potential cyberwar of cataclysmic proportions from an unseen enemy.

Beyond that, there are a number of other themes in my novel that may get readers thinking—climate change, nationalism, human rights. I certainly don’t proselytize, but if my writing stimulates important conversations then that’s a good thing.

While I don’t want to overlook TRIDENT CODE, what do your fans have to look forward to in the next book in your Lana Elkins Thriller series? Can you give us a little insight?

I’m currently at work on my next novel in this series, in which Lana for the first time confronts deadly threats to her family that originate from deep within the United States.

Only one? That’s not easy to answer. I guess it was advice from a creative writing professor in college who told me not to take much of the supposed standard advice at face value. So don’t limit yourself to writing about what you know, or think that a particular approach to writing is best. Instead he told me to just write—and write, and write. You need to be stubborn and determined because it takes enormous persistence and discipline to succeed. That’s as true as ever. And I’d give the same advice to aspiring authors.

TRIDENT CODE is on sale now. Learn more about it and the other CODE novels by Tom Waite on his website. 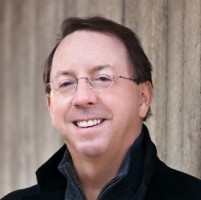 Thomas Waite is a bestselling author of thrillers. His debut novel, TERMINAL VALUE, was critically praised (one critic wrote “I believe with time he will become the John Grisham of the murderous technology novels.”) and reached #1 at Amazon. TERMINAL VALUE is an intense thriller that provides an insider’s look into the excitement of a technology start-up, the anticipated riches of an initial public offering, the gut-wrenching murder of a friend, and the dark side of corporate America.