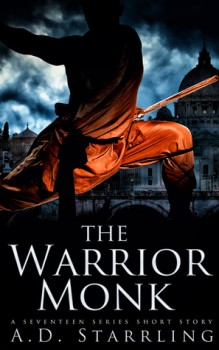 Founded at the turn of the ninth century by the Lotus-Born Second Buddha and inspired by the most powerful immortal warrior who has ever lived, the Order of the Three Spears has kept the existence of the immortals a secret from the eyes of ordinary humans and maintained peace between the races for nearly twelve hundred years.

When news of an ancient enemy reaches them from the West, the Order sends its best and most unorthodox field agent to investigate.

In the course of his mission, Brother Yonten crosses paths with a remarkable immortal operative also tasked with hunting the enemy. What he uncovers will determine not just his own fate, but that of the Order, the immortal societies, and the human race.

THE WARRIOR MONK is available from Amazon, Barnes & Noble and Kobo.

Praise for the Seventeen Series

“Starrling writes with meticulous attention to detail and if this isolated book is an indication of her talent, she most assuredly has significant contributions to make to contemporary literature.” Grady Harp *Top 100 Reviewer* *Hall of Fame* *Vine Voice*

“Remember to breathe. If I could give this 10 stars I would!” Cabin Goddess

A.D. Starrling is the author of the award-winning action thriller series Seventeen.

Born on the small island nation of Mauritius in the Indian Ocean, A.D. came to the UK at the age of twenty to study medicine. After five years of hard graft earning her MD and another five years working all of God’s hours as a Pediatrician, she decided it was time for a change and returned to her first love, writing.

Her thriller series Seventeen combines action, adventure, science, and a dose of the paranormal to make each book an explosive, adrenaline-fueled read.

Her debut novel Soul Meaning (Seventeen Series Book #1) has won and been nominated for several awards, as has the second book in the series. She currently lives in Warwickshire in the West Midlands, where she is busy writing the next installments in the series. She still practises medicine. AD Starrling is her pen name.

To find out more, please visit her at www.adstarrling.com and sign up to her newsletter for info on upcoming book releases, sneak previews, and special promotional offers.