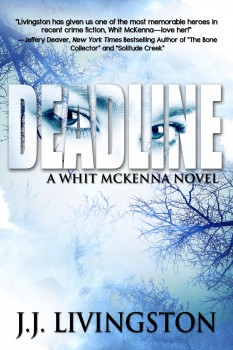 L.A. Times journalist Whit McKenna is recovering from a harrowing assignment in Afghanistan. Seeking refuge she moves with her two daughters to a small Southern Oregon town and works as a crime reporter for the local newspaper.

A month on the job and she’s assigned to cover the murder of a famous actress. Thrust into the media firestorm, Whit’s PTSD kicks in full force with disturbing flashbacks, each one exposing repressed memories of her nightmare in Afghanistan. Years of journalistic instincts strengthen her resolve and with dogged determination she pursues the sensational story.

When two more high profile members of the community end up in the morgue with the same gruesome detail, Whit joins forces with medical examiner detective Katie Riggs. Quid pro quo they follow a trail of deception.

Medical science has played a twisted part in this deadly drama and each front page article she writes brings her closer to a vicious killer who will stop at nothing to silence his victims.

DEADLINES is available from Amazon.

Jeffery Deaver, The Bone Collector and Solitude Creek
“A nonstop thrill ride! Turn the first page and your hooked. And Livingston has given us one of the most memorable heroes in recent crime fiction, Whit McKenna–love her!”

J.J. began her writing career as a journalist. She graduated from California State University, Fresno with a degree in journalism and worked as a crime reporter for the Fresno Bee.

Interested in foreign affairs she traveled to Russia in the late 80’s and lived in London studying art and literature.

While abroad she traveled into the war regions of Croatia and wrote an award winning article on the women and children refugees.

She has two daughters and lives in Oregon with her pug, George.