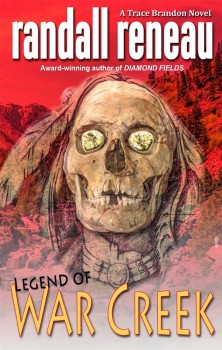 On August 18, 1882, Joe La Fleur discovered a gold-bearing quartz vein near the headwaters of War Creek, high in the Cascade Range of Washington State. Later the same day . . . he lost it. One hundred and thirty years later, geologist Trace Brandon re-discovers the vein, guarded by a skeleton with a flint arrowhead imbedded in a femur, and a carved wooden owl—admonitions not to desecrate hallowed ground.

Ignoring the warnings, Brandon stakes a number of mining claims and begins drilling—only to see two of his men murdered in a grisly, ritualistic manner. The situation soon goes from bad to worse when Brandon’s old nemesis, Mafia don Peter Pantelli, learns of the discovery and devises a ruthless plan to eliminate Brandon and take control of the mining claims.

Brandon is caught between forces he can’t comprehend and treachery he understands all too well . . .

LEGEND OF WAR CREEK is available from Amazon.

Randall Reneau is the author of five novels, including Diamond Fields, a Royal Dragonfly Book Awards grand prize winner, and Deadly Lode, a Richard Boes Memorial Award winner. He is also a two-time winner of the Pinnacle Book Achievement Award. A former international geologist and Vietnam veteran, he lives with his wife, Lynne, in Austin, Texas.