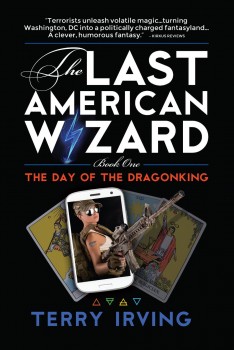 A trio of suicide attackers with magical abilities bring down a 747 by summoning a dragon to rip it from the sky, using the hundreds of lives lost as a sacrifice to initiate the Change. The country morphs into a new landscape of swords and sorcery. Now computers and other machines are coming to life, and regular people have started to turn into mythical creatures and forgotten deities, creating a chaotic world easily seized by whoever—or whatever—set this shift into motion. Hope appears in the nation’s capital where, along with transforming Democrats into potbellied elves, Republicans into cantankerous dwarves, and Tea Party members into trolls, the Change has granted struggling freelance journalist Steve Rowan the abilities of the Tarot Arcana’s Fool card, making him a powerful, yet unreliable, wizard. Realizing his potential, he is “hired” by the trivia-obsessed sentient computer Barnaby and coupled with the attractive, no-nonsense female Navy SEAL Ace Morningstar to uncover the puppet masters behind the plane crash. Irving (Courier, 2014, etc.), a producer of Emmy Award–winning news television and a journalist well-acquainted with the Beltway, makes good use of clichéd Washington stereotypes by mashing them together with fantasy tropes, breathing new life into political satire. …Like many first books in a genre series, the novel foreshadows a greater enemy behind all this madness while barely hinting at its identity, offering a wonderfully bizarre consolation prize as its denouement.

DAY OF THE DRAGONKING is available from Amazon.

“The characters are varied and unique, and the interactions between the three main characters is fantastic. ”
Owen Robinson

“ This is a book that grabs you from the first page and keeps you wanting to know more. ” Crystal Holdefer

“ This was more than entertainment, this was intelligent writing of the highest caliber. ” Veritas Vincit

“Great satire this is! Terry Irving is a contemporary Jonathan Swift and his `Gulliver’s Travels’ are all right here at home. Bravo! Highly Recommended wonderful nonsense.” Grady Harp

Terry Irving was hired as a motorcycle courier for ABC News in 1973 and this led to a 40 year career in television news (and the idea behind his first book, Courier.) He has won 4 Emmys and multiple Peabodys, DuPonts, and Tellys while working at ABC, Fox, MSNBC, and CNN. In addition, he has been in on the ground floor of three technology startups, developed many of the online media taken for granted today (like the newsblog,) and written for nationally-known anchors and correspondents. After publishing his debut novel in May 2014, he watched as his publisher died a horrible death in June 2014. After a year spent fighting over rights, Terry formed a Publishing Company, Ronin Robot Press, in November 2014 and is well on his way to publishing four of his own books and as many as 20 from other independent authors by the end of 2015. As I always say, I still live in Bethesda Maryland outside DC because my wife and my dog refuse to live anywhere else.