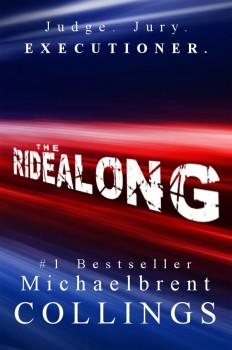 “I’ve left clues for you, and clues for the police. They’ll be searching for you. The evidence at the scene of Officer Knight’s death is enough to send you both to jail.”

“Who am I searching for?”

The Voice laughs. That strange, dangerous laugh. “Me, of course.”
***
It was supposed to be just one more ridealong, a night when high schooler Melissa Latham accompanies her father on his patrol. But when a psychotic killer targets them for a wicked game, the night turns into a high-speed chase where there is no prize for second place.

They have to find a killer before he murders the next one of their friends.

They have to find a killer before they are caught and charged for the murder of the men he’s already killed.

They have to find a killer… before he finds them.

THE RIDEALONG is available from Amazon, Barnes & Noble and Kobo.

“… prepare to be creeped out.” The San Francisco Book Review

Michaelbrent Collings is a #1 bestselling novelist and screenwriter, and one of Amazon’s Most Popular Horror Writers.

His bestsellers include The Colony Saga, Strangers, Darkbound, Apparition, The Haunted, The Loon, and the YA fantasy series The Billy Saga.

He also has a Facebook page at http://www.facebook.com/MichaelbrentCollings and can be followed on Twitter through his username @mbcollings.

Sign up at http://eepurl.com/VHuvX for advance notice of MbC’s new releases, sales, and freebies. You will also be kept safe when the Glorious Revolution begins! MWA-hahahahaha!

Day of the Dragonking: Book 1 of Last American Wizard by Terry Irving

Those of My Kind by Jennifer Loring