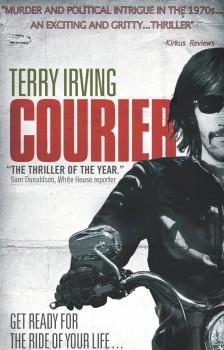 Ronin Robot Press has released 2014 Debut Author Terry Irving’s first novel, the political thriller “Courier” on Kindle after the closing of Irving’s original publisher, Exhibit A Books, in June 2014. Exhibit A discontinued the ebook 45 days early but the new edition was up online in only two days.

COURIER is available from Amazon.

“The suspense never lets up from the first page to the last.”
Rick Putnam is a recent Vietnam vet in the early 1970s who works as a courier for a Washington, DC television station while trying to put his life back together after being injured in the war….”Courier” is a tense story set in the days before social media, when news professionals still need to develop film in a dark room and splice footage together. Author Terry Irving clearly knows the inside of the news business in a different time…”
—Reviewed by Kathleen Heady for Suspense Magazine

“Courier is Terry Irving’s debut novel and it is fantastic”
–Beth Milinski
“…the thriller of the year!” -Sam Donaldson

I moved to Washington DC in 1973 to kick around for a few weeks until I decided on a real career. I ended up riding a classic BMW R50/2 for ABC News during Watergate.

Carrying that news film was the beginning of a 40-year career that has included producing Emmy Award-winning television news, writing everything from magazine articles to standup comedy and developing many of the earliest forms of online media.

After producing stories in Beirut, Hong Kong, El Salvador and all 50 states, I still live right outside Washington, DC because my wife and my dog simply refuse to live anywhere else.

Day of the Dragonking: Book 1 of Last American Wizard by Terry Irving