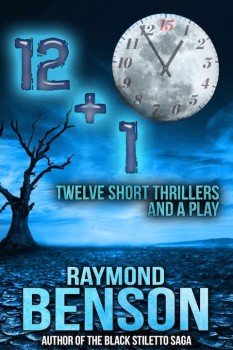 From internationally-acclaimed author Raymond Benson, “12 + 1” is a collection of previously published mysteries, thrillers, science fiction, and fantasy, all told with wry humor and in the spirit of The Twilight Zone–plus some unpublished works such as “The Heart of Erzulie,” “Fortunata-697,” and the stage play “Second Chance.” Spies and detectives, rock ‘n’ roll crime, time travel, androids, alternate history, an encounter with St. Peter, and even The Black Stiletto, all in one compact anthology.

12+1: TWELVE SHORT THRILLERS AND A PLAY is available from Amazon and Barnes & Noble.

RAYMOND BENSON is the author of 35 published books. His most recent thriller series is THE BLACK STILETTO; the fifth and final installment, THE BLACK STILETTO: ENDINGS & BEGINNINGS, was published in November 2014. Raymond was the fourth—and first American—official author of James Bond novels, and his works are collected in the anthologies CHOICE OF WEAPONS and THE UNION TRILOGY. Raymond also teaches film history and is a working musician. www.raymondbenson.com

The Secret Corps by Peter Telep