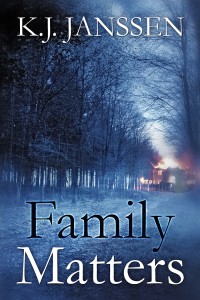 Family Matters is like early episodes of the TV drama Dallas. The plot is fueled by rivalry, jealously, greed and, ultimately, murder. The setting is a stuffy New England town with an economic caste system. Good guys; bad guys.

In this family saga, the first Adam Kingston builds a clothing manufacturing company from scratch. In his sixties he commits suicide and his son takes over the business. Adam II continues to build Kingston Industries until his reckless life style results in dementia. The courts turn the father’s estate and control of the business over to his son and he is interned in the West Wing of Kingston Manor while his son Adam Kingston III ruthlessly expands the business.

The destinies of five townspeople in the quiet community of Old Pebscott, Connecticut are transformed as they converge with the Kingstons. The interplay between Adam Kingston III and the townspeople provides a fast moving drama as each of the main characters vies for position.

The reader is exposed to a myriad of emotions moving in and out of the character’s lives. Each has a good reason to hate the Kingstons, but only one of them hires an Assassin to kill Adam III and his father and to burn Kingston Manor to the ground.

FAMILY MATTERS is available from Amazon.

Family Matters is artfully crafted and keeps you at the edge of your seat. It is a compelling read from cover to cover. What a fascinating group of characters Janssen has created for us; each with their own baggage and yet each the victim of either Adam Kingston III or his father. No wonder one of the townspeople hires an assassin to kill the father and son and burn Kingston Manor to the ground. Janssen toys with us as he leads us down false paths as we try to figure out who the heavy is. Family Matters is the kind of book that you will recommend to your friends and will be as anxious as I was to author a five-star review on Amazon

Ken is a multi-genre novelist living in Ohio, with his wife and miniature Schnauzer.

Fatal Dose, the second Mark Matthews Mystery exposes a drug mafia distributing counterfeit prescription drugs and revisits some of the villains from Blood Money. It was published March, 2013.

Family Matters is a multi-genre work about three generations of the Kingston family. The protagonist, Adam Kingston, provokes each of the main characters with a series of ruthless actions until one is driven to hire an assassin to kill both Adam and his father and burn Kingston Manor to the ground. It was published March, 2015.

The Keys to the Kingdom is a about a modern day Everyman, It introduces a way to enter the Kingdom of God on earth.

The Siblings, is a captivating family saga and an introspective of the hierarchy in sibling families. Gambling, drugs and infidelity are rampant in this tale of the Symington family.

Ken is a member of ITW.