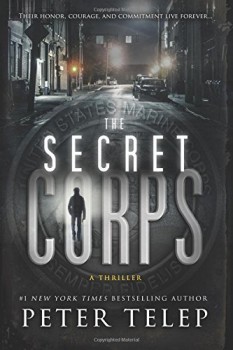 #1 New York Times Bestseller Peter Telep is back with The Secret Corps, his latest pulse-pounding thriller incorporating a call to action unlike anything seen before in contemporary fiction.

When a small town home invasion results in a tragic death, retired Marine Master Sergeant James “Johnny” Johansen agonizes over questions whose answers threaten his loved ones, his career, and his company. The most serious question of all—is Johnny’s family linked to Islamic extremists in the United States?

Johnny turns to Willie, Corey, and Josh—his former brothers-in-arms. Relying on their skills as highly-trained Marines, the team uncovers a treacherous plot involving a renegade defense contractor and the highest levels of a U.S. intelligence network.

Risking their lives to reveal the shocking details of the operation, Johnny and his friends discover that hundreds of terrorists are poised to launch a coast-to-coast attack on American soil. Time is running out! Who can Johnny trust?

THE SECRET CORPS is available from Amazon.

PRAISE FROM THE TOUGHEST CRITICS OF ALL…

“After reading this book, I am awed by Peter Telep’s attention to detail and how plausible this story could be.”
–Master Sergeant Clifton Lee, USMC (Ret)

“The players from Johnny and “the boys” to the Marine Corps Band of Brothers will all seem larger than life, but there is not one who would fail to live up to the challenge.”
–Lieutenant Colonel R.C. Adams USMC (Ret)

“Peter Telep did his homework–from our verbiage and personality nuances to the gear and equipment we use. I truly enjoyed reading this novel!”
–Joseph “Willie” Parent, Former GySgt USMC, 2D Force Recon / 2 Marine Special Operations Battalion

“The bond between Marines can never be broken. In The Secret Corps, you really get to understand that.”
–Josh Iversen, Former Staff Sergeant, USMC

“Mr. Telep has done a fantastic job of capturing the life long brotherhood that we share as Marines and our drive to accomplish the mission. Semper Fi!”
–Gunnery Sergeant Eric N. Gordon, USMC (Ret)

“This is a great adventure from cover to cover.”
–Corey Peters, Former Sergeant, USMC

“When we read Mr. Telep’s writing, it is obvious to us all that he gets it.”
–Master Sergeant James “Johnny” Johnson, USMC (Ret)

Peter Telep is the author of more than forty novels. With the assistance of technical advisors from all branches of the service, he has documented the exploits of U.S. Army Special Forces in Afghanistan, tank platoon commanders in Korea, and mercenary fighters in Angola, Uzbekistan, and Vladivostok, among others. His collaboration with Tom Clancy, Against All Enemies, debuted at #1 on the New York Times Bestsellers List. Additionally, he has written many bestselling novels based on Tom Clancy’s Ghost Recon, Endwar, and Splinter Cell video game series. Mr. Telep’s work on The Secret Corps involved extensive research, including a trip to the Sig Sauer Academy in New Hampshire, where he received hands-on training in many of the weapons featured in this novel. He also traveled to Camp Lejeune, North Carolina, where he had the opportunity to pilot a Riverine Patrol Boat and make an “unauthorized” J-turn, much to the surprise of his soaked but smiling hosts. Find him on Facebook: facebook.com/pages/Peter-Telep/194193593950279 Or email at ptelep@mac.com.