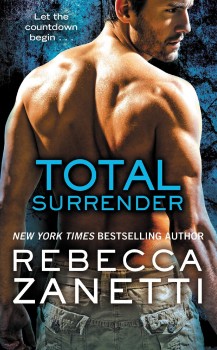 New York Times and USA Today bestselling author Rebecca Zanetti knows a thing or two about men, especially alpha males and the women who fall for them. Her latest romantic suspense novel, TOTAL SURRENDER, is the fourth and much anticipated final book in the Sin Brothers Series, which follows four brothers with unnatural powers genetically engineered into them by a black ops military unit that trained them to be killers. In this final installment, the youngest of the Sin Brothers, Jory, has awakened from a two-year coma. Imprisoned, anticipating his chance to escape and reunite with his brothers, he’s sentenced to death by the lethal chip in his spine—unless the brilliant and sexy Piper Oliver can find a way to deactivate the chip in time.

A prolific author, Zanetti has published three series in multiple genres, including contemporary romance, dark paranormal, and romantic suspense. We’re thrilled Zanetti took the time to answer a few questions for The Big Thrill on the heels of her newest release.

Congratulations on the publication of TOTAL SURRENDER, the fourth book in the Sin Brothers series! What can you tell us about TOTAL SURRENDER that’s not on the back cover?

Thanks so much! TOTAL SURRENDER is the fourth and final book in the series, and it answers all of the questions, especially the main one of who shot Jory. I can tell you that you probably won’t guess who the shooter actually was, or if you do guess, you probably won’t know why. Feedback so far from early reviewers has been reassuring that many of the twists and turns took them by surprise.

The Sin Brothers series is romantic suspense with paranormal elements. RT Book Reviews said of Forgotten Sins, the first book in the series, “Zanetti pulls together a heady mix of sexy sizzle, emotional punch and high stakes danger in this truly outstanding tale.” When writing this series, what themes do you find yourself drawn to again and again?

The series has a couple of main themes. The first one is the strength of brotherhood and family. The Dean boys will do anything, sacrifice everything, for their brothers, and that shows in each book. The second theme is more universal in that both good and bad exist on their own in the world, and even people surrounded by evil can fight through to the good. Nobody taught these guys right from wrong, and yet they work hard to create a safe world for their loved ones, and they’re able to completely fall in love.

The four books were all Top Picks from RT Book Reviews, which truly shows how hard my editor works at Grand Central. Michele Bidelspach is phenomenal, and I really appreciate her insight and dedication.

Can you tell us a little more about Jory and his brothers? What are some of the elements of their past that have made them the men they are today?

The Dean boys were created in test tubes by a black-ops military organization that raised them to be killers. They formed a brotherhood and planned to escape, always relying on loyalty and inner strength. As men, they really don’t understand women. I mean, they like women, and they definitely are capable of falling in love, but the only women they’ve known were cold scientists. So there’s some humor in their romantic journeys because they’re both clueless and sweet. And deadly, of course.

You write two additional series: the Dark Protector series and the Maverick Montana series. Can you tell us a little about them?

I’m feeling a little odd right now because I just realized (yes, I’ve been avoiding that reality) that all three of my current series are ending by mid-2015. The Dark Protectors is a dark paranormal series featuring vampires that spans a couple of generations. The tenth and final book, Marked, was released in December and hit the NY Times Bestseller list. A spinoff series, the Realm Enforcers, will debut with Wicked Ride this coming June.

The Maverick Montana series is a fun, contemporary series featuring sexy cowboys in Montana. The fourth and final book, Over the Top, will release in July. (The third book hit the Times, so my fingers are crossed for this one, too). It features the youngest and only female sibling of a wild bunch of ranchers. The entire town conspires to get her together with her brother’s best friend, often with unexpected and hopefully humorous results.

You have an interesting career history. Please share with us a little about your journey to becoming an author.

Well…right after college, I worked as an art curator for at traveling exhibit for a couple of years, and then I decided to work for a U.S. Senator. At that time, I became interested in the law, so I attended law school and worked as a trial attorney for a few years. Then our kids came along, so I transitioned into teaching at a college. At that point, we had a disastrous winter, got snowed in, and I figured it was time to give writing a shot. I finished my first book in January of 2009, sold to Kensington that December, and I’ve been writing full time since. I think I’ll keep writing, but I would like to go back to school at some point and study something totally new, maybe in the sciences.

I love this question, but I’m never quite sure how to answer it. I write a first chapter without really knowing anything about the characters or plot. Since I write romances, the hero and heroine always meet or meet again at the beginning, so those chapters are a lot of fun for me. After I write that first chapter, then I figure out who they are, what they want, and what’s going to prevent them from getting what they want. I don’t outline, but I really admire people who do.

Sure! Don’t give up, and don’t chase the market. In other words, sit down and write something, keep writing, and write what you personally want to read. Studying craft is always a necessity. Every author has a unique path, and whatever yours is will be great if you keep trying.

Absolutely! We live about half-way up a mountain, and my office has views of a beautiful lake and mountains that reach into Canada. It also has a fireplace and cute Pottery Barn furnishings. It’s my favorite place to create.

Besides the Realm spinoff, we’re looking at doing a Sin Brothers spinoff series. I also have a new series, the Scorpius Syndrome, releasing February of next year with Kensington Zebra. It’s a post-apocalyptic sexy romance, and I just signed the first book, Mercury Striking, with a film and television agent. I know it’s a long shot, but it’s still nice to dream. 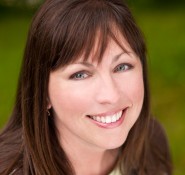 New York Times and USA Today Bestseller Rebecca Zanetti is the author of over twenty-five dark paranormals, romantic suspense, and contemporary romances. She lives in the wilds of the Pacific Northwest with her own Alpha hero, two kids, a couple of dogs, a crazy cat…and a huge extended family. She believes strongly in luck, karma, and working her butt off…and she thinks one of the best things about being an author, unlike the lawyer she used to be, is that she can let the crazy out. Her current series are: The Dark Protectors, The Maverick Montana Cowboys, and the Sin Brothers series. Upcoming series are: The Realm Enforcers and The Scorpius Syndrome.