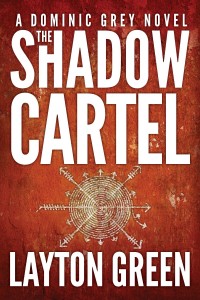 The sins of the past always return…

Called upon by a former love to look into the death of a family friend in Miami, veteran investigator Dominic Grey is sucked into the darkest reaches of international narcotics trafficking. The murders of multiple drug dealers during a bizarre religious ceremony, combined with the appearance of a mythical assassin, take DEA agent Federico Hernandez and CIA operative Lana Valenciano down the same deadly path.

Lying in wait is an enemy known only as the General: a criminal mastermind whose uncanny ability to avoid detection while cowing even the most ruthless of rival cartels has made him a legend.

Thrown together on a covert manhunt, Grey and the two government agents race across the Americas to unearth a dark chapter in the history of the CIA that has spilled into the present—and put them in the crosshairs of an underworld puppeteer with a frightening reach.

THE SHADOW CARTEL is available from Amazon.

Praise for The Diabolist
“Part international thriller, part philosophic treatise on good and evil, part intricate, unforgettable nightmare-inducing fever dream, THE DIABOLIST has everything you want from a thriller. Layton Green is a master of intellectual suspense. This one’s a killer.”— JT Ellison, New York Times bestselling author of EDGE OF BLACK

“[A] story that will move you to the edge of your seat.” — Seattle Post-Intelligencer

“A well-crafted and exciting thriller with a pair of interesting protagonists . . . and a charismatic villain who makes our skin crawl.” — Booklist

“The confines of a page are not enough for Layton Green’s writing. His work begs to be translated into 100-foot high IMAX images, rendered in 3D, and given a score by Hanz Zimmer” — Biblioteca

“Layton Green kicks things up a notch and delivers a novel that should, if there’s any justice to be found upon the shelves, make him a household name. The Diabolist is a dark, intelligent, spellbinding novel . . . I cannot recommend this one highly enough.” — Beauty in Ruins Reviews

“Green’s The Summoner proved his great talent. The Diabolist ensures his place at the top of crime fiction: his number 1 place. Unbelievably good, unbelievably intricate, unbelievably Green.” — The Review Broads

“Dan Brown is pretty good at what he does and I don’t begrudge him his success, but when it comes to interesting characters embarking on a thrilling exploration into the dark world of cults, religions and magic Layton Green does it SO much better.” — Nylon Admiral Reviews

“The Diabolist by Layton Green brings together ancient religions, New Age cults and heroes with dark pasts in a top-shelf novel . . . It was hard for me to put this book down at night simply to sleep.” — Night Owl Reviews

Praise for The Egyptian

“Stirring and imaginative, with an engaging premise that is briskly paced. Both the characters in the story and the reader are in for a wild ride.” – Steve Berry, New York Times bestselling writer of The King’s Deception

“[If] James Bond and the X-Files had a love child, this book would be it.”
– Keryl Raist, To Publish or Not to Publish
“Wow. Layton Green has become the new master of gripping, chilling, and suspenseful stories.” – Two Readers Reviews

“[A] fantastic thriller that leaves the reader breathless and on the edge of their seat. Green’s writing reminds me of Michael Crichton’s works with the mysteries, thrills, and the life-changing scientific discoveries.” – Cherie Reich, Surrounded by Books

“This is what you get when you combine Indiana Jones with Ludlum’s Jason Borne . . . A must read for all you lovers of conspiracy theories, thrillers and mysteries alike!” – Baffled Books
“I do believe Layton Green has moved into my top 5 author category – not an easy feat to attain!” – A Novel Source

“Green’s debut The Summoner was such a great read, I was hoping that he’d duplicate his literary excellence. In his second book, The Egyptian, Green did not disappoint me, he exceeded my expectations.” – BookPleasures.com

“Layton Green is an absolutely brilliant writer.” – Everything To Do With Books

“Never short of climactic events and supernatural thrills, Layton Green twists and turns you in your seat, unraveling a tale so multi-dimensional even the most leery will be attracted.” – Luxury Reading

Praise for The Summoner

“The Summoner is one of those books that make you want to turn on all the lights in your house and lock the doors . . . The settings are authentic and you can feel and smell the countryside . . . This is a wonderful read for those who enjoy both suspense and action stories.” — Seattle Post-Intelligencer

“Mystical, complicated, completely believable and terrifying . . . [w]ith an ending that will catapult you out of your reading chair. Riveting.” — The Review Broads

“Favorite book of the year so far.” — A Novel Source

“An awesome read . . . The writing is polished and evocative, the subject matter fascinating, the characters intriguing, and the pace non-stop. Spooky and occasionally metaphysical, The Summoner harkens back to The Serpent and the Rainbow in its ability to convincingly portray seemingly paranormal events in a realistic (and therefore even creepier) manner.” — Blood Writes, Mystery Pick of the Week

“I moved a little outside my comfort zone with The Summoner, and I am glad I did. A blend of action, history, anthropology, thrills, and chills, all delivered with a mature, polished voice. I am eager for more from this author.”
— Scott Nicholson, Bestselling Author

“Layton Green has written a tale with supernatural and political undertones that unravels with ever increasing suspense . . . The book is plain terrific.” — Richard Marek, former President and Publisher of E.P. Dutton

“Green writes like a dream, and Dominic Grey is a fascinating protagonist . . . . The next installment of Green’s suspenseful storytelling and Grey’s next journey can’t come soon enough!” — Melody Moezzi, Award-winning Author, War on Error

“[T]his book is above and beyond in its narrative, its cohesiveness, the depth of its characters and the quality of the writing. This is one of the best books I’ve ever read for Odyssey Reviews.” — Odyssey Reviews

“[C]alls to mind such series as Jason Bourne and Indiana Jones, with supernatural/religious overtones thrown in.”
— Bookhound’s Den

“Wow. This book, it packs a walloping punch . . . What a truly original story this was.” — Tiffany Harkleroad, Book Blogger and Amazon Vine Voice

“Truly a captivating novel. The excitement travels from page to page and this is one story that will stay with you way after you turn that last page.” — Socrates’ Book Review

“Fascinating . . . intriguing . . . stunning . . . one of the most thought-provoking novels you will ever read!” — Book Reader’s Heaven

Layton Green is the author of the Dominic Grey series—which includes The Summoner, The Egyptian, The Diabolist, and The Shadow Cartel—as well as other works of fiction. His novels have reached #1 on numerous genre lists and have cracked the Amazon Top 50 in the United States, the United Kingdom, and Germany. Visit him on Facebook, Goodreads, LibraryThing, or his website at laytongreen.com.