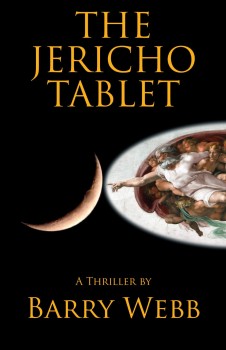 An ancient tablet is discovered that threatens to undermine the foundations of Christianity and Islam. The tablet gives instructions for resurrecting an older god once worshiped in the Ancient Near East who offers humanity a Faustian bargain: eternal life with unlimited knowledge and no ills or warfare in turn for unquestioning devotion and surrender of free will. This older “god” turns out to be a computerized artifact buried just under the surface of the moon eons ago by an ancient space faring race. Matt Nolan and his colleagues in the U.S. Intelligence services have only a limited amount of time to uncover the secrets of the artifact and find a means for destroying it while corralling a corrupt U.S. President and fending off Terrorist–before they themselves are destroyed.

–This thriller has movie written all over it. The Jericho Tablet does what a thriller is supposed to do, which in my view is to keep you up all night reading. Janis Weisbrot, copy editor for Seven Stories Press

THE JERICHO TABLET is available from Amazon.

–The Jericho Tablet is a fast-paced novel that is a genuine page-turner. It is filled with believable characters and incidents in the USA, Russia, and the Middle East. The ending both surprised and worked for me. The author also deftly interweaves simultaneous events taking place in different locales. The Jericho Tablet has all the ingredients to make a great film. Donald Michael Platt, former script writer and author of the award-winning historical novel Rocamora.

–Government conspiracies, religious fanatics, ancient myths, global intrigue, and science fiction spice this thriller. A fast moving story that is peopled with believable characters. I was caught up immediately and stayed captive until the end. Recommended reading! Fran Marion, author of Carved in Stone and the Rug Broker.

–The Jericho Tablet is a thriller that has many parallels and similarities between our present world and what could very well happen in the future. Rich in history and understanding of the Middle Eastern mind renders this work extremely educational as well. I learned a lot. The tempo never slackens and the author’s masterful ability to switch scenes on a global stage while retaining plot continuity at a heated pace keeps the reader wanting more. Like a proverbial “literary box of chocolates,” after one or two chapters of this page turner, I can assure you that you’ll be hooked!” Col. Richard F. “Dick” Brauer Jr. USAF (Ret.) Co-Founder of Special Operations Speaks.

Barry Webb as an MA degree in Ancient History, an MA degree in Middle Eastern Studies, logged a 25-year career as an Arabic Language analyst/translator for NSA and other government entities. He has lived, worked, and studied in the Middle East for a number of years and has taught some school along the way. He currently lives in Arizona.