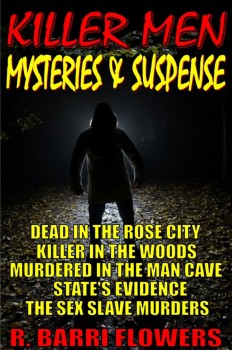 Dead in the Rose City (A Dean Drake Mystery)

In this hard-boiled detective novel nothing is quite what it seems. Dean Jeremy Drake, nicknamed D.J., is a private investigator and ex-homicide detective for the Portland Police Bureau. He is six-five, hip, tough, armed with a .40 caliber Glock, and courts danger and romance with equal abandon. These qualities are put to the test when Drake is framed for murder in the midst of two seemingly unrelated cases. The more he investigates, the more he realizes they are intricately and dangerously connected. It literally becomes a life and death issue as Drake has to use all of his detective skills, and then some, to fit all the pieces together in a deadly, high stakes whodunit and why.

Killer in The Woods (A Psychological Thriller)

In the town of Bluffs Bay, Washington, a serial killer dubbed by the press as “The Woods Strangler” is killing beautiful women in the affluent neighborhood of The Woods. In an effort to bring the community together to fight this terror, Selene Herrera, director of a local battered women’s shelter, helps establish a neighborhood crime watch group with the help of second husband, Quinn. When he is accused of being the strangler, Selene is left to wonder if it is a cruel hoax or if she has married a brutal killer, who has now set his sights on her to join his growing list of victims.

Murdered in the Man Cave (A Riley Reed Cozy Mystery)

In the first book of an exciting new cozy mystery series, Riley Reed has a popular blog offering advice on home décor and renovation and does part-time consulting work in Cozy Pines, Oregon. When Riley is asked by an old flame, Brent London, a bestselling mystery writer, to help him spruce up his man cave as a newly single man, she readily accepts the assignment. But when she discovers him bludgeoned to death with a pool cue in his man cave, she finds herself thrust into the investigation to track down the killer, risking her own life in the process.

In this heart pounding legal thriller, assistant district attorney Beverly Mendoza appears to have an open and shut case when she prosecutes Rafael Santiago for the murder of a judge and the sexual assault of his wife in Eagles Landing, a town in Northern California. Santiago was recently released from prison and had a grudge against the judge. But her case against the suspect is put in jeopardy when career criminal Manuel Gonzalez, arrested for the murder of a young woman, also confesses to killing the judge. As Beverly and Wilameta County Sheriff’s Homicide Detective Stone Palmer try to sort out fact from fiction, a case of mistaken identity becomes a real possibility. Or is it more likely that two violent men with close ties are trying to beat the system?

In this much-more-frightening-than-fiction tale of domination, depraved lust, substance abuse, violence, and murder, top selling true crime writer R. Barri Flowers tells the whole story of a couple’s twisted relationship, their ghastly crimes and ability to elude the law, how they were finally captured, and the two riveting trials that ultimately pitted wife against husband, with the stakes higher than either one imagined in their murderous bond.

A killer couple bound together by secrets, lies, and dark sex slave fantasies. Barely five feet tall, sweet and innocent looking, Charlene Gallego used all of her charms to beguile pretty teenage girls and young women into the back of a van, where her lethal husband, Gerald, lay waiting. Married multiple times and still in his early 30s, Gerald Gallego found the perfect companion in Charlene. Over a grisly period of 26 months, their bloody and brutal rampage of kidnapping, rape, and murder spanned three states and claimed 11 lives before justice could be served.

KILLER MEN MYSTERIES AND SUSPENSE is available from Amazon, Barnes & Noble and iTunes.

“An interesting blend of classic film noir and rough, modern cinema. Quick action and tight dialogue make it a jolting thriller.” — Robert A. Sloan, author on Dead in the Rose City

“Flowers once again has written a page-turner legal thriller that begins with a bang and rapidly moves along to its final page.” – Midwest Book Review on State’s Evidence

“A masterful thriller set in the dark underbelly of Maui, with lots of fine action, down and dirty characters, and the vivid details of police. A terrific read!” — Douglas Preston, bestselling author on Murder in Maui

“It gets no better than this! R. Barri Flowers has written another thriller guaranteed to hold onto its readers!” — Huntress Reviews on Dark Streets of Whitechapel